Take a glimpse at what crime fighting might look like in the near future in this new slot from Triple Edge Studios in association with Microgaming. ActionOps Snow & Sable revolves around two elite cyber agents called Snow and Sable who arrest criminals in the futuristic city of Aurora. They have a tonne of cool gadgets at their disposal such as ladybug tracking devices and a sleek looking batmobile type of car to help track down the bad guys and stop them in their tracks. Let’s join the dynamic duo on their latest mission and see what cash prizes might await us in Aurora?

ActionOps Snow & Sable is a 5 reel slot with 10 paylines that comes with Free Spins, Stacked Wilds, and Wild Reels. 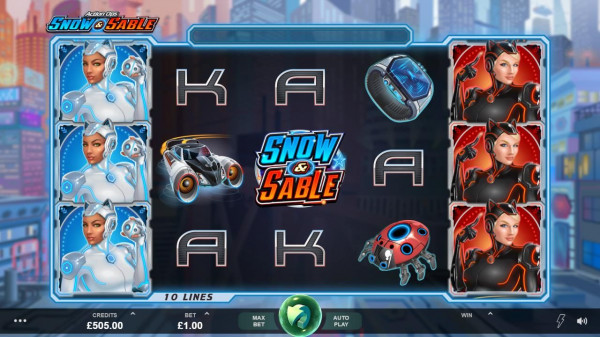 The first feature to discuss is that the game features 3 Wild symbols which are individual images of Snow and Sable as well as one image of both agents together. These symbols replace all other symbols on the reels apart from each other and the Scatter symbol to help create winning combinations on the reels. A pleasing aspect of the Wilds is that they come stacked which means they can appear on all of the reels as stacked on top of one another to further boost your chances of landing a big win. The Snow and Sable individual symbols along with the Scatter symbol pay out the most in this slot as if you land 5 Wilds or Scatters on the reels then you will be smiling big time with a fantastic payout worth 100X your stake!

The main feature of this slot is the Free Spins bonus game which is triggered by landing 3 or more Scatters on the reels. The Scatter symbol is represented by the game logo and the more of these symbols you land then the more Free Spins you will receive. For example, 3 awards 10 Free spins, 4 gives 15 Free Spins, and 5 Scatters awards a fine set of 20 Free Spins. During Free Spins, reels 1 and 5 will become fully wild and will proceed to randomly change between Snow and Sable. You can also increase your tally of Free Spins by landing additional Scatters in this feature. 2 Scatters awards 5 Free Spins and 3 gives out 10 Free Spins. The most satisfying thing about the Free Spins bonus game is that there are no limits as to how many Free Spins you can win. This means that potentially you could land unlimited Free Spins and with 2 active Wild reels in play, it really increase your chances of winning big by quite some margin.

The presentation of the game is superb as it takes place in the futuristic city of Aurora with tall skyscraper buildings looming in the distance and a bustling motorway just below. Symbols are wonderfully rendered onscreen and consist of Snow, Sable, a Car, a Watch, a pair of Shades, a robot Ladybug, as well as classic A – J icons. The animations are impressive as symbols fly up and down the reels and highlight nicely when part of a winning payline as they enlarge and shine brightly. It’s especially pleasing when you land a big win on the reels as the screen is showered with gold coins which is visually pleasing on the eye.

The music is suspenseful with a techno-style backing track used. It fits in really well with the futuristic theme of the game.


Our Verdict on ActionOps Snow & Sable

This slot is produced by Triple Edge Studios in collaboration with Microgaming and is an action-packed trip to the future where stopping crime is the order of the day. ActionOps Snow & Sable features fantastic graphics, thrilling gameplay, a fitting soundtrack, along with a nice set of bonus features. It’s possible to rack up a few decent wins with the Stacked Wilds symbols in play but you’ll find that the biggest wins occur in the Free Spins feature which unfortunately can take quite a few spins to trigger. However, it is worth putting the time in as you can potentially land unlimited Free Spins with 2 permanent Wild Reels active which makes thing a whole lot easier in helping you win the top prize of 1,000X your bet. Variance-wise, I found this slot to be High so you will have to endure quite a few dry spins before seeing a profitable return on the reels in this game. For slots with a similar futuristic theme, check out Iron Girl and Big Bot Crew.

Decrypt codes to win a fortune on the reels when you play ActionOps Snow & Sable!