Aztec Glory from EGT: Slot Review - witness the magnificence of an ancient empire

Take a trip back in time and gaze in awe at the glory of the Aztec Empire.
aztec glory casino game review egt jackpot slots slots

The Aztec Empire has a special place in Mexico’s history. This ancient civilization ruled the valley of Mexico until the Spanish arrived and defeated them in the 1500s. The most powerful city of this empire was Tenochtitlan which later became known as Mexico City. At the height of its power, the Aztec Empire extended its reach to countries as far as El Salvador and Honduras. EGT decided to make a slot about this famous civilization, to allow players to experience the glory and splendor of the Aztec Empire all for themselves.

The game has 5 reels, 10 paylines, and features Free Spins, Expanding Symbols, 4 Progressive Jackpots as well as a Gamble mode. 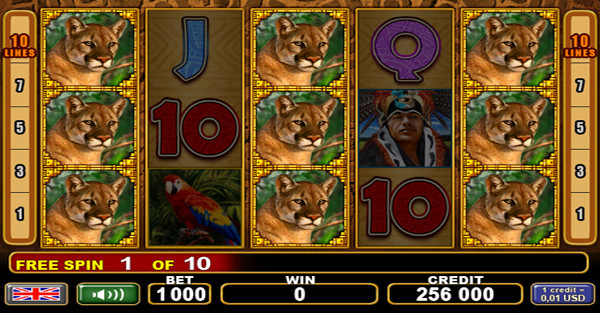 The first feature to mention is the Wild symbol and this symbol is represented by an Aztec temple. It substitutes for all of the other symbols in the game in order to boost your chances of landing a winning combination.

If you land 3 or more Wild symbols anywhere across the reels then you will trigger the Free Spins feature. As soon as you trigger this feature you will be taken to a new set of reels where you will be given 10 Free Spins and one of the symbols will be randomly chosen to act as a special expanding symbol. The expanding symbol covers 3 positions on a reel and pays out in any position on the line played. It is also pleasing to see that you can retrigger Free Spins while in this feature.

To trigger the gamble mode, all you have to do is form a winning combination on the reels. This feature involves guessing the colours of red or black of some random playing cards. If you guess the colour correctly then your win is doubled but choose your card wisely as if you guess incorrectly then you will lose all of your winnings and be taken back to the main game.

The last feature is the set of 4 progressive jackpots which are displayed just above the reels. These jackpots can be won at any time, regardless of what happens in the main game. When a jackpot game is triggered, you will need to match 3 of the same suit of playing cards in order to win one of the progressive jackpots.

The presentation and graphics are superb as you witness the Aztec Empire in all of its glory as you play the game. The background is filled with an intricate Aztec temple design and symbols consist of an Aztec man and woman, a parrot, a puma, and a beautifully rendered Aztec temple. The animations are fantastic as symbols bounce into life with some neat video effects whenever you land a win along the reels.

The music has a real Aztec flair to it as it features loud drums, soothing pan pipes and rattles. It suits the theme of the game nicely.

The game has 10 paylines, a decent RTP of 96.23%, a maximum payout worth 5,000X your bet, and four different progressive jackpots.


Our Verdict on Aztec Glory

Aztec Glory is produced by EGT and is a splendid tribute to the ancient Aztec civilization. The presentation of this slot is superb and although it does not contain that many features, the Free Spins game alone will provide you with countless hours of entertainment. It also helps that you can retrigger even more Free Spins which greatly enhances your chances of landing some huge wins. With 4 progressive jackpots up for grabs, jackpot fans are also going to love playing this game!

Seek out a vast treasure in Aztec Glory!