Join King Henry the VIII as he goes up against his 6 wives in a battle of regal proportions when you play this amazing slot!
battle royal casino game review play'n go slots

This new release from Play’n GO invites you to take a trip back in time to the Tudors period to when King Henry the XIII ruled all of England. King Henry the VIII was one of the most iconic English monarchs of all time and used his “divine right of kings” to marry 6 times and even went as far as beheading two of his wives! This slot takes a humorous look at King Henry the VIII and his 6 wives as guillotines drop on the reels while the king is haunted by the ghosts of his wives as you play this game. Let’s join King Henry the VIII in his palatial palace as he takes on his wives both alive and dead to hopefully win us a nice cash payout!

Battle Royal is a 5 reel slot with 20 paylines that includes Extra Wilds, Free Spins, a Long Live The King Bonus Game, and a Royal Flush feature. 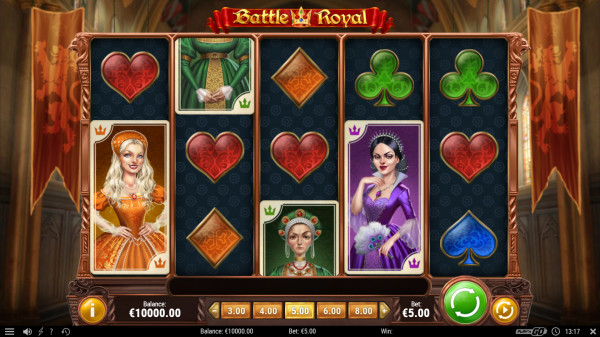 The first feature to discuss is the Wild symbol which is appropriately an image of King Henry the VIII. This symbol replaces all other symbols on the reels apart from the Scatter to help create winning combinations. It is also the highest paying symbol in the game as if you manage to land 5 Wilds on an active payline then you will bag yourself a fine payout worth 30X your stake!

As you play the game, low paying symbols may transform into the same randomly chosen symbol to further boost your chances of landing a big win on the reels. This is a random bonus event known as the Royal Flush feature.

The Scatter symbol is illustrated by a coat of arms and if you land this symbol on the first and last reel then you will be invited to choose from two Scatters to reveal one of two bonus features. These features are Free Spins and Long Live the King.

If you trigger the Free Spins feature then you will have to choose which of Henry’s wives will survive the Free Spins guillotine. During Free Spins, a guillotine will appear on each reel and one will fall on every spin. If one of the wives gets the chop then she will transform into a Wild symbol for the remainder of the feature, giving you even more chances to win. Free Spins continue until only one wife remains. When this happens, then you must select a reel to place her upon. If she loses her head then you will trigger the Long Live the King feature but if your chosen queen is the last one standing then you will bag an additional cash prize.

The Long Live the King feature is a pick-me style bonus game where you have to help King Henry the VIII pick chests in a dungeon all the while avoiding the ghostly spectres of his beheaded wives! As you pick chests you will reveal cash prizes but after each pick, a ghost of one of Henry’s wives will appear and proceed to move across the screen over 1 row of chests. If King Henry is caught by a ghost then the feature will end but if you find the Key in one of the chests then you will receive a mystery multiplier which is applied to your winnings. Once the key is obtained, you can then choose to escape the dungeon or risk opening more chests for additional cash prizes while trying to avoid those scary ghosts! It is important to highlight that you will only receive the mystery multiplier if you choose to escape the dungeon and that the multiplier is applied to the total wins from Free Spins and this bonus feature when activated via Free Spins.

The presentation of the game is visually stunning as it takes place inside the plush royal throne room of King Henry the VIII with intricate lion carvings adorning the sides of the reels. Symbols are intricately detailed and have an almost cartoon-like quality to them. They consist of King Henry the VIII, his 6 wives, 6 ghosts, and classic Hearts/Diamonds/Spades/Clubs icons. The animations are crisp as symbols zip up and down the reels and shine brightly when part of a winning combination. The Free Spins bonus round deserves a special mention as guillotines drop to behead the wives with bright glowing ghosts taking their place. It’s a very neat but morbid touch.

The music is of a jaunty nature with a medieval style soundtrack used. It ties in perfectly with the royal theme of the game.


Our Verdict on Battle Royal

This slot comes from renowned software developer Play’n GO and is a lighthearted and extremely entertaining take on of the most infamous kings in history. Battle Royal features top-notch visuals, fast-paced gameplay, and a wonderful range of exciting bonus features. The Royal Flush feature triggered quite often when playing although wins do tend to err on the small side with this random bonus event. The standout attraction of this slot is the Free Spins feature which can take a good few spins to trigger but your patience is rewarded nicely with up to 5 Extra Wilds along with the chance to trigger the fun Long Live the King feature. Speaking of the Long Live the King feature, we advise players to escape the room as soon as you retrieve the key to get a mystery multiplier prize rather than risk running into a ghost and leaving empty-handed! When it comes to variance, I found this slot to be High so be sure to have plenty of bankroll and time on hand when you play this game. For slots with a similar royal theme, check out Golden Royals and Royal Spins.

Witness majestic madness on the reels with cash prizes galore up for grabs when you play Battle Royal!