Bird of Thunder from Habanero: Slot Review - rule the skies from high above!

Throughout history, birds were worshipped as sacred creatures, none more so than in Native American culture where many tribes tell stories of the legend of a birdlike beast filled with magical powers. This bird was so powerful that it could summon lightning from the clouds above and would herald its arrival with a big clap of thunder. Games developer Habanero decided to explore the legend of this bird with their latest game release that's aptly called Bird of Thunder.

The slot has 5 reels, 30 paylines and comes with some interesting features such as Free Games and 4 Progressive Jackpots. 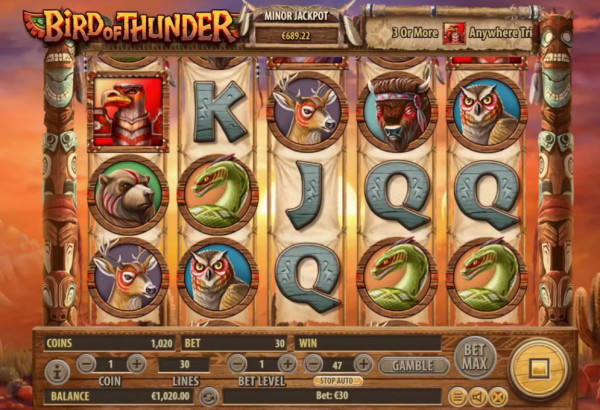 The final feature to mention is the set of 4 progressive jackpots. These jackpots are triggered randomly as you play the game and consist of a mini, minor, major, and a grand jackpot. If your luck is in and you win the grand jackpot then you will bag yourself a massive payout.

The graphics are absolutely stunning to look at as the game takes place in a beautiful desert landscape complete with cacti and a dusky sky. You’ll also notice two colourful Totem poles are cleverly used to support the reels. The symbols are intricately detailed and consist of bears, bison, snakes, owls, and deer. A neat feature of each animal symbol is that they are daubed in Indian war paint which makes them really stand out as you spin the reels. The animations are excellent as symbols zap and sparkle whenever you land a win.

The music is very atmospheric with lots of soft drum beats, soothing pipes, and rhythmic chanting. It ties in really nicely with the theme of the game.

The game has 30 paylines, an excellent RTP of 98%, and a maximum payout worth 696X your original bet.


Our Verdict on Bird of Thunder

Bird of Thunder is made by Habanero and it’s a thoroughly wonderful experience to play. The game is an absolute joy to look at. Although it does not contain that many features, the unique theme and presentation of this game will draw in plenty of players. Bird of Thunder should also pull in lots of jackpot hungry players since it offers a mouth-watering package of 4 different progressive jackpots!

Land a big fortune high up in the skies in Bird of Thunder!