Blaze of Ra from Push Gaming: Slot Review - face to face with an Egyptian God

Ancient Egypt is a theme that has been explored countless times before by software developers all over the world. This latest release from leading software provider Push Gaming is another one to add to the list but instead of just focusing on Ancient Egypt, it shifts the attention to the Egyptian god known as Ra. In ancient times, Egyptians believed that the sun was either seen as the body or the eye of Ra and this god was also worshipped as the creator god. It was believed that when Ra wept, man was born from his tears. In addition to creating man, Ra was also said to have created the seasons, months, plants, and animals. Let’s transport back in time to Ancient Egypt and see if Ra will bestow some good fortune on you when you play this game.

Blaze of Ra is 5 reel slot with 40 paylines and includes Free Games, Stacked Wilds, and a Nudge feature. 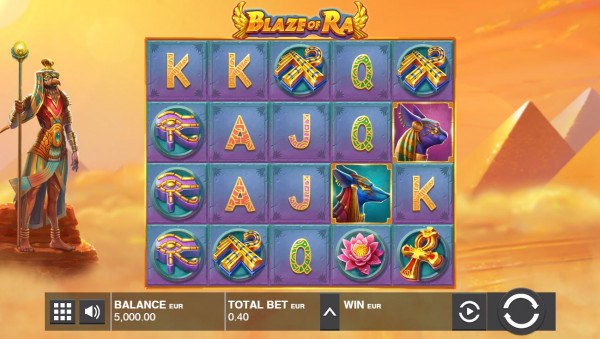 Top Casinos for Blaze of Ra

The first feature to highlight is the Wild symbol. This symbol is illustrated by a colourful image of the bird god Ra. Similar to most Wild symbols, the main function of this symbol is to substitute for all other symbols except the Scarab symbol to help form winning combinations on the reels. Keep a very close eye on this symbol as it is the highest paying symbol in the game. If you are lucky enough to land 5 of these symbols on an active payline then you will be walking like an Egyptian with a payout worth 50X your total bet! This symbol also comes stacked on the reels.

When a Wild symbol appears on the top 2 positions on a reel then you will trigger the Nudging Wilds feature. When activated, the reels will nudge down by 2 symbol positions rather than spin, and all of the other reels will spin as normal. The feature continues until all Nudged Wilds have disappeared from view.

More Bonuses for Blaze of Ra

The game features slick graphics and a highly polished presentation as it is set in Ancient Egypt with Ra the sun god standing next to the reels and you’ll notice a giant pyramid in the background. Symbols are wonderfully designed and consist of an assortment of Ancient Egypt imagery such as Ra, Anubis, Bastet, Horus, an Ankh cross, a Crook, and the standard A – J icons. The animations are impressive as symbols enlarge and highlight with a bright orange frame when part of a winning combination. I also liked how the sand swirls around on the bottom of the reels and makes Ra’s clothes sway back and forth. It’s a nice visual touch.

The music is dramatic with a real mystical kind of vibe. It ties in rather well with the Egyptian theme of the game.


Our Verdict on Blaze of Ra

Blaze of Ra is made by Push Gaming and is a highly entertaining trip back in time to Ancient Egypt. Although the theme of this game has been seen in many other online slots already, this new take on Ancient Egypt feels fresh and exciting to play. This is mainly down to Blaze of Ra featuring visually stunning graphics and a nice range of bonus features. Speaking of bonus features, I was able to trigger the Nudging Wilds feature quite regularly and the rewards can be huge especially when you land multiple payouts with Wilds still nudging on the reels. The Free Games feature took a bit more time to trigger but with an enticing offer of Stacked Wilds on 3 reels then it is definitely worth sticking around for. I found this slot to be of Medium variance so you will find that wins occur on a regular basis the more you play. For slots with a similar Egyptian theme, check out Legend of the Pharaohs and Legend of the Nile.

Pay a visit to the sun god to land a massive fortune you play Blaze of Ra!