Couch Potato from Microgaming: Slot Review - get this lazy sod back to winning ways!

Couch Potato by Microgaming is one great online slot game. It comes with a fabulous jackpot and caters for some great rewards with its free spins and multiplier features.
casino game review couch potato microgaming slot machine slots

Microgaming is being super cheeky in this slot game, or at least the name of this slot game. It’s called Couch Potato. Some may argue a super suitable name for a slot game, given that playing online isn’t the most physically exhausting exercise, others may be offended – the latter is the case if you have no sense of humour! 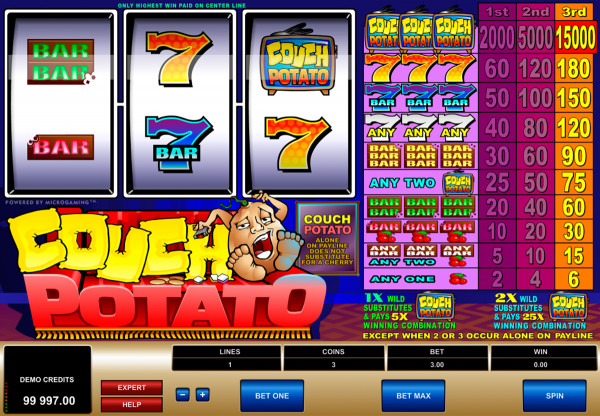 Aside from acting as a jackpot feature symbol, the couch potato also acts as the wild multiplier. As the name indicates, this feature helps you achieve a winning combination, and if successful a 5-times multiplier is the trigger. If two of these symbols help achieve a winning combination, it’s a 25-times multiplier that sees your winnings sky-rocketing. Argh, if only we could high-five the game’s cute lazy couch potato.

The name certainly is good and catchy, and the cute and well-designed logo, a potato with eyes and mouth, sure adds to the great design of this Microgaming slot game. With a very simple blue background and three gigantic reels, which almost take up the entire screen, this slot game is kept simple but stylish – and, most importantly, it is easy on the eye.

Once a player hits the spin button, he sees classic casino symbols, including cherries, zoom past, until the reel comes to a halt. The only less traditional symbol Couch Potato by Microgaming stars is the game’s logo. And this is also where it gets much more exciting that the lazy, slouching potato lets you believe at first glance.

As noted above, this slot game does not make you play max bet. But let's face the figures here, 2000 vs. 15000, makes it quite enticing to give this online slot a shot on max bet. Given that this slot game offers fairly good rewards throughout the game, this may be less of a risk than some players may think. However, if your casino funds will not allow for such flamboyancies (after all, it's a good idea to prolong your gameplay and see how the game unfolds), it is wise not to get tempted into betting the maximum.

Our Verdict on Couch Potato

Couch Potato is one of my favourite classic slot games by Microgaming. It draws on classic fruit machine design but adds some quirkiness with its couch potato idea. Best of all, the variance in this game is rather high. As such, it caters best for those players hoping to make some serious cash playing slots from the comfort of their couch.