Visit a galaxy far far away where lots of planets and a scorching sun surrounded by a star offer huge cash prizes on the reels!
casino game review crystal sun play'n go slots

Blast off into space on an exciting journey amongst a galaxy of strange new planets in this new release from Play’n GO. This game was originally titled Starblast and actually put Play’n GO in a spot of bother with NetEnt due to how similar the name and bonus features of the game really were when compared to their much-loved slot Starburst. You can read more about it here. Not to be perturbed, Play’n GO decided not to let all their hard work go to waste and simply reskinned the game with planets instead of stars and called it Crystal Sun. Let’s see if this game has what it takes to take on the legendary Starburst slot?

Crystal Sun is a 5 reel slot with 10 paylines that includes Wild Multipliers, Expanding Wilds, and Respins. 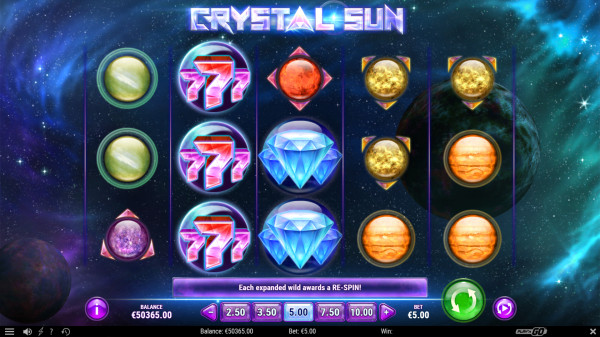 Crystal Sun features a range of colourful symbols based on a variety of different Planets as well as a bunch of Diamonds and a Lucky Red 7 Symbol. Keep an eye out for the Diamonds symbol on the reels as this is the most valuable symbol in the game. Land 5 of these symbols to bag a cash prize worth 16X your wager. Payouts in this game not only occur from left to right but also from right to left to further increase your chances of landing a big win on the reels.

A scorching hot sun surrounded by a star is the Wild symbol in this slot and the main job of this symbol is to replace all other symbols to help create winning combinations. This symbol only appears on reels 2, 3, and 4 and when it does then it will proceed to expand to cover the entire reel. This, in turn, triggers the Wild Respin feature where you are granted a Free Respin with the Wild Reel frozen in place.

If you land another Wild during the Wild Respin feature then this will also expand and award you another Respin. In total, it is possible to get up to 3 Respins with 3 Wild Reels in play. The Wilds also come with attached multipliers which range from 1X to 3X. Amazingly, these multipliers can combine together to give you a maximum multiplier payout as high as 9X!

When it comes to graphics and presentation, Crystal Sun is strikingly similar to Starburst as it also takes place in a space-themed cosmic setting full of twinkling stars. Symbols in the game are beautifully rendered onscreen and consist of Diamonds, Lucky 7s, along with a bunch of different coloured planets. The animations are excellent as symbols zip down the reels rapidly and burst into life dramatically when part of a winning combination. A particular highlight is when the Wild symbol shows up as it proceeds to replicate itself on the other symbols inside of the reel. It’s a really neat visual touch.

The music is dramatic with a fast techno soundtrack playing in the background. It fits in rather well with the Space theme of the game.

The game features 10 paylines, an excellent RTP of 96.6%, and a maximum payout worth 4,000X your initial stake.


Our Verdict on Crystal Sun

This slot is produced by leading software studio Play’n GO and is a mildly entertaining gaming experience. It has to be said though that it does bear an uncanny resemblance to Starburst in terms of theme and bonus features. Having said that, it does feature superb graphics, an atmospheric soundtrack, and offers plenty of entertainment with lucrative Respins containing multipliers that can reach a high of 9X. The top prize for this slot is a whopping 4,000X your bet which can be won in the Respin feature. This is quite large when you consider that its counterpart Starburst only offers a low maximum payout worth 500X your bet. Variance-wise, this slot is High so expect to endure quite a few dry spins before eventually landing a galactic win on the reels. For slots with a similar Space theme, check out Joker Gems and Cazino Cosmos.

Respin your way to lots of cosmic wins on the reels when you play Crystal Sun!