Gaze in awe at the genius of one of the greatest men of all time in this fun slot from High 5 Games.
casino game review da vinci ways high 5 games slots

Travel back in time to the Renaissance period to hang out with one of the greatest painters of all time in this very popular online slot from High 5 Games. The artist in question as you can probably tell by the title is Leonardo da Vinci. Known the world over for creating the masterpiece Mona Lisa, da Vinci was also highly interested in other fields such as architecture, science, music, engineering, astronomy, botany, and even cartography. Sure he even left blueprints behind on helicopters and tanks before they were even invented! Keep on reading to find out if this game is a worthy tribute to the great man himself?

Da Vinci Ways is a 5 reel slot with 243 ways to win that includes Tumbling Reels, Wild Symbols, and Free Games. 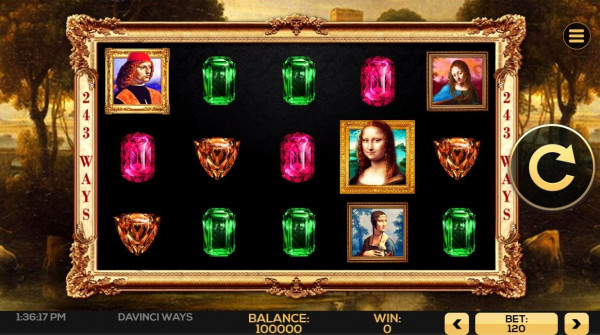 First things first, how do you create wins in this game? Well, it is pretty straightforward as all you need to do is land 3 or more matching symbols on the reels starting from left to right. With up to 243 individual ways of forming wins in this slot, you will be winning plenty of cash prizes in no time at all here!

Like most online slots, Da Vinci Ways comes with a Wild symbol which is represented by an image of a sparkling diamond. The main job of this symbol is to substitute for all other symbols except the Scatter to help create winning combinations on the reels. It only appears on reels 2, 3, and 4 in the main game.

Similar to the classic slot Da Vinci Diamonds, this game features Tumbling Reels where winning symbols disappear to be replaced by new symbols. This type of reel mechanic can be quite rewarding as it allows you to keep on winning provided that you keep on forming winning combinations one after the other.

The Scatter symbol in the game is illustrated by an image of Leonardo da Vinci in red. When you land 3 Scatters in any position on reels 2, 3, and 4 on the same spin then you will trigger the Free Games feature. Once in, you will be taken to a new set of reels and be awarded 10 Free Games. While in Free Games, it is possible to get 5 additional Free Games by landing 3 more Scatters here. The maximum number of Free Games you can be awarded is capped at 50 and this feature will end when there are no more Free Games remaining.

The presentation of the game is pretty basic to be fair as it mainly features a black background surrounding the symbols as they appear on the reels. Symbols in the game are beautifully constructed and consist of Leonardo da Vinci himself, a few of his paintings (Mona Lisa, Portrait of a Musician, Lady with an Ermine, and Virgin of the Rocks), along with a bunch of sparkling gemstones. The animations, on the other hand, are quite impressive as symbols enlarge, rotate around, and then disappear quickly whenever you form a winning combination. It adds a nice layer of variety to the gameplay.

The music is jaunty as a medieval-style soundtrack plays out in the background. It ties in well with the Renaissance theme of the game.


Our Verdict on Da Vinci Ways

This game is produced by leading software studio High 5 Games and is a rather enjoyable trip back in time to the Renaissance period. Featuring decent graphics, a complementary soundtrack, as well as a nice set of bonus features, it’s one classy looking game that’s for sure! The Tumbling Reels mechanic is expertly used here as it enables you to win again and again and the Free Games feature which can take a few spins to trigger is quite fun to play as the action takes place on an entirely new set of reels. It’s also great that you can win up to 50 Free Games while in this feature. Of Medium variance, the top prize on offer for this slot is a fantastic 5,000X your initial bet. All in all, a very entertaining slot that’s definitely worth checking out. For more slots also featuring Leonardo Da Vinci, check out Da Vinci Diamonds and Da Vinci Diamonds Masterworks.

Tumble your way to a Renaissance-filled fortune on the reels when you play Da Vinci Ways!