Donuts or doughnuts as they are called in England are a sweet snack that you will find in most bakeries and supermarkets all across the world. These sweet treats are usually deep-fried and often feature a ring in the middle and are filled with lots of delicious toppings including sugar, chocolate, and glazing. Top games provider Big Time Gaming decided to pay tribute to this snack of all snacks by releasing this slot and aptly called it Donuts. Join us as we visit a donut diner on a desert highway somewhere in America as we look for some of these tasty donuts that hopefully pay out more than a sweet fortune!

Donuts is a 4 reel slot with 2,401 ways to win that includes Free Spins and Wild Multipliers. 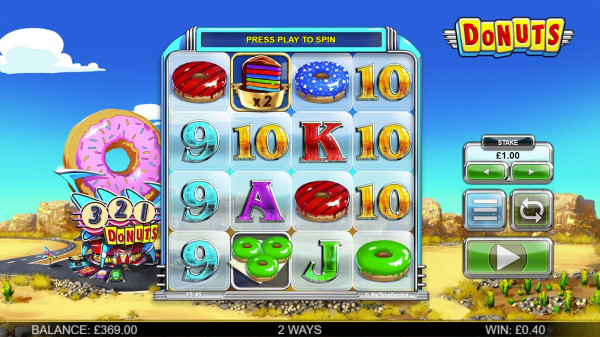 The first feature to mention is that this game is played on a 4x4 grid with a massive 2,401 ways to win. Wins are formed by landing matching consecutive symbols on the reels starting from the leftmost reel. Donuts features an assortment of different coloured donuts but make sure to keep a close eye on the purple donut as it is the highest paying symbol in the game. Land 4 of these symbols on the reels and you will bag yourself a sweet payout worth 15X your wager!

The Wild symbol in this game is represented by an image of a Jukebox. This symbol only appears on reels 2 and 4 and substitutes for all other symbols except the Scatter to help form winning combos on the reels. As you play the game, you may notice a Donut Box symbol appear on the reels. When it shows up it will open up to reveal up to 4 Donut symbols or a Wild with a 2X, 3X, or 4X Multiplier to really boost your chances of landing a big win.

An image of a Golden Donut is the Scatter symbol and if you happen to land 3 or 4 of these symbols then you will trigger the Bonus round where you will be awarded 12 or 20 Free Spins. Before the Free Spins start spinning, you will be taken to a new screen where you will see a collection of 1x1 squares which can reveal blanks or golden donuts. If you are lucky enough to reveal a golden donut then you will receive a nice Multiplier prize. The Bonus round starts with 3 Spins and each Scatter that lands on the reels will increase the Multiplier amount for Free Spins. Believe it or not but it’s actually possible to land up to 50X here all before you start using your Free Spins! You can also retrigger the Bonus round by landing additional Scatters while in this feature. For example, land 2, 3 or 4 Scatters to be awarded 10, 20, or 30 extra Free Spins.

The presentation of the game is visually stunning as the game takes place just outside a donut diner that’s situated on a desert highway somewhere in America. It genuinely plays and feels just like a classic 50’s American diner. Symbols are nicely polished and consist of an assortment of delicious donuts as well as the standard A – 9 icons. The animations are excellent as symbols enlarge and rotate when part of a winning combination on the reels. I especially like how donuts pop out of the boxes on the reels and how the background changes to a stylish purple setting when you trigger the Bonus round feature.

The music is a tad low-fi with various generic sound effects used when spinning the reels. It suits the fast-paced nature of the game really well.


Our Verdict on Donuts

This game is made by Big Time Gaming and is probably the best donut-based slot you will ever play. Granted, there are only a handful of donut-themed slots on the market right now but this most certainly is the best of the bunch. Donuts features beautifully rendered graphics and animations as well as fantastic bonus features to keep you spinning those reels again and again. The random Donut boxes certainly keep things motoring along nicely on the reels especially when you land a nice 4X Wild symbol. The Bonus round is the standout feature of this slot and can take quite a good few spins to trigger but is entirely worth the wait since you can form Free Spin wins with a Multiplier as high as 50X! I found this slot to be of High variance so you will have to endure many dead spins before you will eventually land a big cash payout on the reels. For slots with a similar food theme, check out Sizzling Spins and Burger Man.

Munch your way through some tasty treats to land a ring-shaped fortune when you play Donuts!