Easter Island from Yggdrasil Gaming: Slot Review - expand your way to a fortune!

Easter Island is a very famous island in Chile that is known the world over for having over 887 moai stones. These stones were created by the early Rapa Nui people and the island itself is said to be one of the most remote inhabited islands in the entire world. The island is a World Heritage Site and according to a recent census, there are over 7,750 residents who live there with 60% of them being descendants of the aboriginal Rapa Nui people. Leading software provider Yggdrasil Gaming decided to release a slot to pay homage to this magnificent place, so get ready to set foot on this beautiful Pacific island, and come to face to face with a friendly pair of talking moai stones when you play this game! 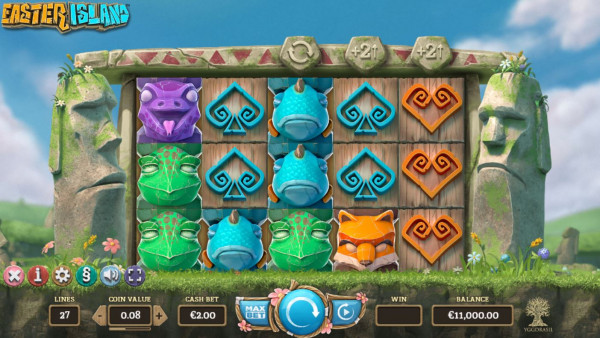 The Wild symbol in the game is represented by a gold statue head with the word ‘Wild’ displayed in blue font. Like most Wild symbols, this symbol substitutes for all other symbols to help form winning combinations on the reels. It only appears on reels 2 and 4 in this game and when it is part of a winning spin then it will become sticky for the Symbol Swap Respin feature and will also expand to cover an entire reel.

The game is a real visual treat for the eyes as it takes place on the beautiful paradise known as Easter Island with two very friendly moai stones situated on opposite side of the reels and birds and butterflies flying around in the background. Symbols are expertly designed and consist of a Bird, a Frog, a Fish, a Lizard, a Fox, and some carved Heart/Diamond/Club/Spade icons. The animations are absolutely fantastic as the moai stones suck symbols in and spit them back onto the reels and I especially liked how the moai stones grow in size when the reels expand after you have landed a 4 or 5 of a kind win. There is also a wonderful intro video to enjoy as it welcomes players to the island and introduces the two fun-loving moai stones when you load the game up for the first time.

The music is light-hearted with lots of soft pan-pipe sounds and slow guitar strums. It ties in nicely with the island theme of the game.


Top software provider Yggdrasil Gaming made this game and it’s certainly one trip to Easter Island you won’t forget anytime soon! The slot is beautifully designed, has a nice range of bonus features for players to enjoy, and most importantly is incredibly fun to play. The Expanding Reels feature keeps things interesting and provides ample opportunities to score some big wins especially when you increase the paylines all the way to 103. The Sticky Wilds can be highly lucrative too and it’s worth mentioning that it is possible to win a staggering 1,880X your wager on every single spin. I found this game to be of Low variance so it won’t take you too long to land a cash payout on the reels but just note that winnings tend to be on the small side. For slots with a similar tropical island theme, check out Froots and Fruit Blast.

Land a moai-sized windfall when you play Easter Island!