Head off on an exciting treasure hunt adventure deep in a South American rainforest with Kane when you play this outstanding slot!
casino game review ecuador gold elk studios slots

Venture deep inside a dark and mysterious South American rainforest in search of hidden treasure in this latest release from popular software provider ELK Studios! This slot follows intrepid explorer Kane as he explores the dense vegetation for the fabled lost Temple of Luck. As he makes his way through the Ecuadorian rainforest, his tracker blips rapidly as he finally makes it to the temple which is located right beside the distant mountains as correctly predicted by the locals who live near it. Let’s enter the temple along with Kane to see what kind of lost treasures await us on the inside?

Ecuador Gold is a 6 reel slot with 4,096 ways to win that includes Free Spins, Ghosting Wilds, Mega Symbols, and an Increased Ways To Win feature. 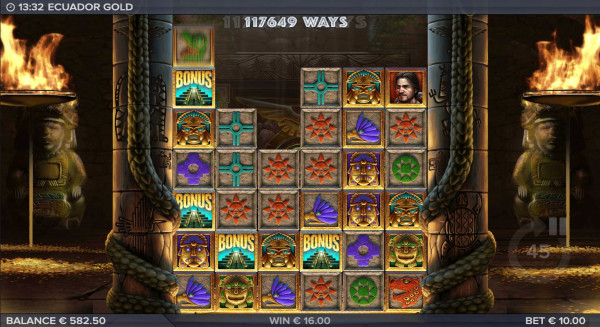 The first feature to highlight is that this game features a staggering 4,096 ways to win where wins are created by landing matching symbols on adjacent reels. When you do land a win then all winning symbols will explode to leave space for additional symbols to drop. This is known as the Avalanche feature and continues until there are no more winning combinations on the reels. Each win actually increases the number of rows (up to 8 in total) which in turn increases the number of ways to win which can go as high as a spectacular 262,144 ways to win! With thousands of ways to land wins on the reels, you will be leaving the Temple of Luck with lots of treasure in your pockets in no time at all!

Ecuador Gold features colossal symbols which can appear on the reels at any time. The sizes of these symbols range from Super, Mega, and Epic which appear as 2x2, 3x3, and massive 4x4 blocks on the reels. They are counted as containing a number of 1x1 symbols so the 4x4 block would represent 16 standard symbols. These huge symbols help to remove smaller symbols as they avalanche down which further enhances your chances of landing a big cash prize.

The Wild symbol in this slot is represented by an image of a golden star shape. It only appears on reels 3, 4, 5, and 6 in the main game and substitutes for all other symbols apart from the Scatter symbol. When it does appear on the reels, it will move a random number of steps and leave a trail of Wilds behind. This is known as the Ghosting Wild feature and can turn a Super symbol fully Wild if it comes across it on the reels.

The Scatter symbol is denoted by an image of the Temple of Luck and if you land 3 or more of these symbols anywhere on the reels then you will trigger the Free Drops Bonus Game. It goes without saying, the more Scatters you land then the more Free Drops you will be given. For example, 3, 4, 5, or 6 Scatters award 10, 15, 20, or 25 Free Drops. In this fun bonus game, when you land a win the safety level will push up one row to give you an even better starting position for the next free drop. Keep on winning to get to the maximum 8th row to benefit from a mind-boggling 262,144 ways to win! We should also mention that this bonus feature can be retriggered by landing additional Scatters and that Wilds become sticky to further boost your chances of getting an epic win on the reels.

With this being an ELK Studios release, you just know you are in for a real treat in terms of graphics and animations and this game certainly delivers on that front! It is set deep inside the dark and mysterious Temple of Luck with tall stone columns holding the reels together along with intricate Inca designs in the background. Symbols are superbly rendered onscreen and consist of Kane, a bunch of Inca Stone Blocks, as well as colourful carvings of animals such as Crocodiles, Birds, and Snakes. The animations are spectacular as symbols tumble down the reels and then proceed to explode in dramatic fashion when part of a win. It’s particular impressive when you increase the ways to win after landing a few wins as the screen pans out to reveal even more rows on the reels.

The music features an excellent tribal type of soundtrack which fits in perfectly with the jungle theme of the game.


Our Verdict on Ecuador Gold

Leading software studio ELK Studios created this slot and it's one treasure hunting adventure we simply could not get enough of! It features exquisite graphics, an atmospheric soundtrack, along with a wonderful range of rewarding bonus features. The colossal symbols certainly keep things interesting on the reels although sadly I was not able to land a massive 4x4 symbol even once. It is nice that the Wild symbol leaves a trail of Wilds in its wake as it ‘ghosts’ across the reels and this symbol popped up quite regularly too. The star attraction of this slot is the Free Drops bonus game as not only can you benefit from lots of Free Drops but also lucrative Sticky Wilds too. We should also not forget that there are whopping 262,144 ways to win to enjoy provided you make it all the way to the 8th row of course! The top prize for this slot is a fabulous 2,500X your bet and we found this slot to be of High variance so make sure to have lots of bankroll and patience before you enter the Temple of Luck with Kane. For slots with a similar Jungle Adventure theme, check out Gonzo's Quest and Lost Relics.

Treasure hunt your way to an avalanche of riches in Ecuador Gold!