Fire & Steel from Betsoft Gaming: Slot Review - there be Dragons!

Join the Swordsman and the Shieldmaiden as they battle to save their land from a horde of evil dragons.
betsoft gaming casino game review fire & steel slots

This latest release from software developer Betsoft Gaming has a real touch of Game of Thrones about it. The slot focuses on two rival noble Houses who have been fighting ever since the ancient High Queen was assassinated. The Queen bore 2 children but neither was formally named as heir to the throne. The daughter became the Shieldmaiden and the son became the Swordsman and as they took to the battlefield for one final showdown to decide who should rule the land, neither of them anticipated the arrival of some ferocious Dragons! It is now up to the Shieldmaiden and the Swordsman to put aside their differences and work together to eliminate the greatest threat their world has ever faced. Can you help them defeat the Dragons and help restore order to a broken land?

Fire & Steel is a 5 reel slot game with 20 paylines and includes 2 Wild Symbols, Free Spins, and a Gamble feature. 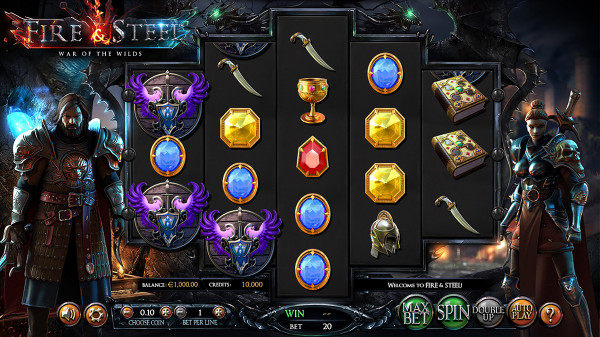 The first feature to highlight is that the game does not feature just one Wild symbol but in fact two! The Wild symbols consist of the Shieldmaiden and the Swordsman. When you land the Swordsman Wild symbol, you will notice a bright red vertical beam bursts from the symbol either from above or below which turns every symbol in its path into a Wild symbol. Similarly, when the Shieldmaiden Wild appears, it will also release a red beam and turn symbols into Wilds but only from either the right or left direction. The Wild symbol is the highest paying symbol in the game and if you manage to land 5 of these symbols on an active payline then you will bag the top jackpot prize of 2,500 coins!

The last feature to mention is the optional Double Up game. To play this risky but fun game all you need to do is click on the ‘Double Up’ button when you land a win. In this mini-game, you have to choose between heads or tails of a gold coin as it is tossed. Choose correctly and your winnings will be doubled. If you like to take a bit of a risk then you press the ‘Gamble All’ button to stake all of your winnings but be warned that if you guess incorrectly then you will lose all your current winnings and be taken back to the main game with some very empty pockets!

The presentation of the game is superb as it features some amazing 3D graphics. As you play the game, you’ll notice the Swordsman and the Shieldmaiden standing battle-ready on opposite sides of the reels with some fearsome black Dragons in the background. The symbols are beautifully detailed and consist of the Swordsman, the Shieldmaiden, a Crown, a Book, a Helmet, a Dagger, a Goblet, Royal Crests, and an assortment of fine jewels. The animations are very impressive as symbols bounce into life and sparkle when you land a win. I really enjoyed watching the Wild symbols transform as the Swordsman/Shieldmaiden scream out a battle-cry and emit a glowing red beam each time they popped up on the reels.

The music is loud, orchestral, and of the epic variety. It suits the fantasy theme of this slot really well.


Our Verdict on Fire & Steel

Betsoft Gaming created this highly entertaining game and although it does not contain too many features, it does have a lot more depth than you might realise at first. The Wild symbols are expertly used in this slot and using both symbols to trigger Free Spins is a real stroke of genius. In fairness, it did take me quite some time to trigger Free Spins but it is definitely worth your patience as the rewards can be huge especially when you land a few Shieldmaiden symbols together. I found this game to be of Medium variance so you will need to invest quite a bit of time and money before finally landing a big payout.

Rally the troops to victory in Fire & Steel!