The World Cup is almost upon us and to celebrate the world’s richest fox is swapping his huge mansion for a referee strip and taking charge of an exciting football match played in a packed stadium. For those that do not know the Foxin' series is a collection of hugely popular games made by NextGen Gaming that centres on a very wealthy fox and his family of cute fox cubs. The most popular game in the series by far is the all-time classic slot Foxin’ Wins (read our review here) and just a while back, NextGen Gaming released a Christmas-themed slot called Foxin’ Wins A Very Foxin’ Christmas. So without further ado, let’s lace up our footie boots and head to pitch and see if this game is worth a few spins of the reels? 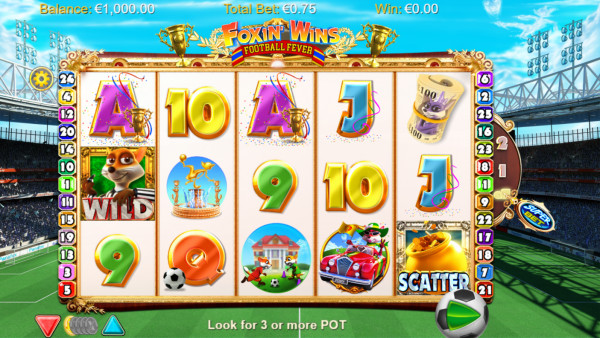 The first feature to discuss is the Wild symbol and this is illustrated by an image of Mr. Foxin wearing a referee top and holding a pipe. It substitutes for all other symbols in the game except the Scatter symbol to help form winning combos on the reels. It is also the highest paying symbol in the game as if you land 5 of these symbols on an active payline then you’ll be celebrating like you just won the World Cup with a payout of 2,000X your total bet! On any spin, a Fox Pup may appear inside a reel and when this happens they will transform a symbol into a Wild symbol to further increase your chances of landing a big payout.

Similar to previous Foxin' games, this online slot has a SuperBet mode. This is an additional wager where you can adjust and increase your wager to enable even more Fox Pups to show up on the reels and generate lots more Wild symbols in the process. The SuperBet options consist of:


The final feature to discuss is the Random Bonus Event. This feature is a random event that occurs in the base game after any paid spin and either Fox Funds or Leprechaun Shakedown will trigger to give you some nice cash payouts. When the Fox Funds feature triggers then the Fox will show up on screen and shower you with coins. If the Leprechaun Shakedown feature triggers then you will be awarded a cash prize but only if the Leprechaun is caught so make sure you catch him!

The graphics are visually stunning as the game takes place in front of a packed out football stadium with a clear blue sky overhead. I have to admit that it is nice to see Mr. Foxin move away from his luxury mansion and play a Foxin’ game in a whole new environment. Symbols are football-themed as you might expect and consist of Mr. Foxin in a referee top, Mrs. Foxin driving a red car, fox cubs playing in front of the mansion, a globe, a money clip, and the traditional A – 10 icons. The animations are excellent as symbols blink and flash when part of a winning combination and you never get tired of watching Mr. Foxin shower the screen with gold coins and footballs when you trigger the Fox Funds feature.

The music is bouncy and jaunty with the odd footie chant thrown in for good measure. It fits in really well with the football theme of the game.

This game is made by leading software provider NextGen Gaming and is extremely fun to play. It features fantastic gameplay, top-notch graphics, and is full of enough bonus features to keep you entertained for hours on end. The most lucrative feature in the game is the Free Games feature as all payouts are doubled and it’s great that you can retrigger this feature again and again. The SuperBet feature allows you to control your bets and is worth using should you wish to see more lucrative Wild symbols pop up on the reels and the football theme of the game will no doubt pull in quite a few punters with the World Cup due to kick off soon. I found this slot to be of Medium variance so it might you take some time before you land a big win on the reels but the rewards are definitely worth your patience especially if you land the top prize of 2,000X your total bet! For slots with a similar football theme, check out Hugo Goal and Ultimate Dream Team.

Hit the back of the net to win a massive fortune when you play Foxin' Wins Football Fever!