From Dusk Till Dawn from Novomatic: Slot Review - that's what I call a show!

Join the Gecko brothers as they attempt to survive a whole night in a Mexican bar full of vampires in this excellent slot.
casino game review from dusk till dawn jackpot slots novomatic slots

From Dusk Till Dawn is a cult movie that was written by legendary filmmaker Quentin Tarantino and directed by Robert Rodriguez. This movie takes place in a seedy strip club in the Mexican desert where we are introduced to the Gecko brothers who are famous bank robbers and played by George Clooney and Quentin Tarantino. The Geckos are supposed to wait at the club until dawn for an escort to bring them to a sanctuary called 'El Rey' but little do they know that vampires own and run the club so when night falls all hell breaks loose! The Geckos must work together with an innocent family caught in the middle to avoid being bitten at all costs and make it out when dawn finally arrives. Leading software provider Novomatic decided to release a slot based on this classic black comedy horror movie. Let’s find out if it’s worth sinking your teeth into?

From Dusk Till Dawn is a 5 reel slot with 50 paylines that includes 2 Fixed Jackpots, Dancing Wilds, Free Spins, and 3 Random Bonus features. 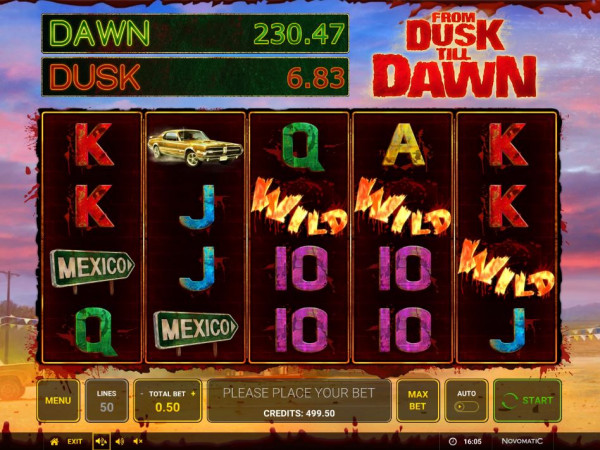 Top Casinos for From Dusk Till Dawn

More Top Casinos for From Dusk Till Dawn

The first feature to discuss is the typical Wild symbol and this symbol is displayed by the word ‘Wild’ in bright red font. It comes stacked on the reels and is 4 symbols high. The main function of this symbol is to replace all other symbols apart from the Scatters to help form winning combinations.

In the main game, you can randomly trigger 1 of the following 3 different bonus features:

The Scatter symbol is depicted by an image of the famous Mexican bar in the movie and if you manage to land 3 of these symbols anywhere on the reels then you will activate the special Bonus Twister feature. In this fun feature, you get to spin a wheel to win cash prizes or access to additional bonus features. Land on a cash prize and the value of the other prizes increase for the next spin. You get to keep on spinning until you win 3 cash prizes in a row or stop on the Pick a Bonus segment. If you land on this segment then you will get to choose between the Dancing Bonus feature and the Mugshot Bonus feature.


The Dancing Bonus feature awards 10 Free Spins with all new symbols appearing on the reels including Snakes, Hearts, Clubs, Tequila Bottles, and Razor Charlie. The main villain Satanico Pandemonium will also appear on the reels as a symbol here and acts as a Dancing Wild that substitutes for all other symbols. This special Wild symbol can alter in size and position and can cover between 2 and 12 symbols on the 3 central reels. This makes it possible to get 3 fully Wild reels on every Free Spin to further boost your chances of landing a big win on the reels. Also keep a close eye on flames appearing on reels 1 and 5 in this feature as when they appear then you will trigger the Xtra Stack feature where the reels will transform to display the same kind of symbol. Xtra stacked symbols are chosen randomly when this feature triggers.

The Mugshot Bonus feature awards 3 Free Spins but is played on 15 single reels with only Seth, Richie, Change, or Level Up symbols appearing. Every time a Richie or Seth symbols stops, a prize is awarded and the symbol is then held in place for the remaining Free Spins. When a Change symbol stops then all held Richie symbols are transformed into Seth symbols. The Level Up symbol increase the prize level for this bonus. There are 5 different Prize Levels which makes it possible to upgrade 4 times. This feature ends when either no Free Spins remain or a Full Screen is achieved. If you manage to fill the screen in this bonus feature then you will be awarded the top maximum payout which is an incredible 5,000X your total bet!

The final feature to discuss is the 2 Fixed Jackpots that this game offers. These jackpots can be won on any base game spin with the Dusk Jackpot guaranteeing a jackpot worth 100X your stake whereas the Dawn Jackpot will give out a whopping 21,000X your stake! Make sure to play the game at the maximum bet level otherwise you will only receive a fraction of the jackpot prize.

Best Welcome Bonus for From Dusk Till Dawn

More Bonuses for From Dusk Till Dawn

The presentation of this slot is highly polished and features lots of cool imagery from the movie. The game takes place just in front of the infamous Mexican strip club with a dusky purplish sky in the background. Symbols consist of a bunch of characters from the film including the Gecko brothers, Jacob Fuller and his daughter, as well as a Yellow Car, a Mexico Road Sign, and your standard A – 10 icons. The animations are superb as excerpts from the movie play out when you land a big win on the reels and symbols enlarge and flash brightly when part of a winning combination. I especially like when the On the Run bonus feature kicks in with a car whizzing by on the reels that then flips a bunch of symbols into Wilds.

The music is soft rock with lots of slow guitar strums. It ties in really well with the fast-paced nature of the game.


Our Verdict on From Dusk Till Dawn

This game is produced by Novomatic and I’m happy to report is a very faithful adaptation of a classic cult movie. The graphics are fantastic with a rocking soundtrack to complement the gameplay perfectly. The amount of bonus features on offer in this slot is incredible and it’s certainly one action-packed online slot that provides plenty of entertainment. The Random Bonus features trigger quite frequently the more you play and the most rewarding feature by far is the Mugshot Bonus feature. Manage to fill the screen in this fun bonus game and you will be taking home a highly lucrative top prize worth a cool 5,000x your stake! It’s also pleasing to see that there are 2 Fixed Jackpots on offer which can be won on any random base game spin. In terms of variance, I found this slot to be Medium which means that you won’t be waiting too long until you land a reasonably sized cash payout on the reels. For slots with a similar vampire theme, check out Blood Suckers II and Blood Eternal.

Escape a horde of blood-thirsty vampires to win a fortune when you play From Dusk Till Dawn!