Gem Rocks from Yggdrasil Gaming: Slot Review - a gem of a game!

This new release from renowned software studio Yggdrasil Gaming transports players to a strange world inhabited by a race of gentle gem-hearted giants. Their world is completely covered in a variety of multi-coloured stones and gems and these giants are on hand to help players rack up huge wins on the reels. Astonishingly, this game comes with a whopping 4,096 ways to win! This is also exactly the same amount of ways to win seen in the recent smash-hit Thunderkick online slot Pink Elephants. Let’s see if hanging out with these gem-hearted giants is worth your while and hopefully they are not as dull as a rock!

Gem Rocks is a 6 reel slot game with 4,096 ways to win that includes Dropdown Wins and a Gem Rock feature. 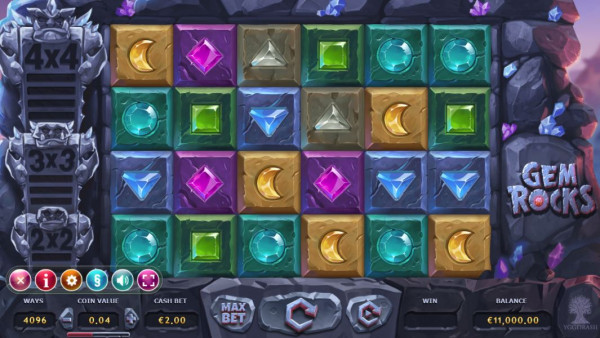 The first feature to highlight as touched on above is that this game features an enormous 4,096 ways to win! Any 3 of a kind combinations across the reels awards a payout and this increases when you land more of the same symbols across the other reels but if any of those reels has more than one instance of the winning symbol in it then the payout is multiplied. For instance, if the first reel contains 2 symbols, the second reel has 3 symbols, and the third reel has 2 symbols then the total multiplier is calculated using this formula: 2*3*2 =12.

Gem Rocks features cascading wins which is referred to as dropdown wins in this game. When you form a win on the reels then the winning symbols will disappear from the reels to leave room for new symbols to drop down. New symbols will keep dropping down until no more winning combinations can be created. When 4 or more matching symbols form a square formation then they may act as just 1 symbol or split up into individual 1x1 symbols when the reels come to a halt. Players can win up to 9 consecutive wins and these are recorded in the Gem Rock meter which is located on the left-hand side of the reels. The meter is reset each time a player lands a non-winning spin.

The main attraction of this game is the Gem Rock feature and this is triggered after a player has 2, 5, and 9 consecutive dropdown wins. Once activated, a massive Monster Rock will land on top of the reels and this rock is made up of matching symbols. This bonus feature guarantees a win each time and the size of the Monster Rock is determined by how many consecutive dropdown wins you form on the reels. These are outlined below:

This game features exquisite graphics full of colour and detail as it takes place in front of a huge dark grey rock formation that’s covered with a whole host of stones and gems. Symbols consist of an assortment of different coloured gems and stones and include diamond shapes, moon shapes, as well as a highly lucrative red star. The animations are fantastic as symbols glow brightly and then explode in dramatic fashion when you form a win and it’s a real visual treat when one of the rock giants shows up to help you land an even bigger win on the reels.

The music is atmospheric and of the epic variety with a soaring soundtrack. It complements the fast-paced gameplay really well.


Our Verdict on Gem Rocks

This game is powered by Yggdrasil Gaming and it’s a very enjoyable online slot to play. It’s easy enough to play, has wonderful graphics, and has just the right amount of bonus features to keep players happy. Although this slot does not feature Free Spins or Wilds, the simple concept of forming consecutive dropdown wins to land huge payouts should entice many a player to give this fast-paced slot a go. I really liked the fact that you know exactly when you are closing in on a big win thanks to the Gem Rock meter displayed beside the reels. This really adds to the gameplay and it makes it even more fun to play. Volatility-wise, I found this to be quite High with a maximum payout of 9,217X your initial bet the top prize on offer here. For slots with a similar gems theme, check out Giovanni’s Gems and Reel Gems.

Land a massive gems-filled fortune when you spin the reels in Gem Rocks!