This game revolves around a beautiful lady known as the Golden Goddess perhaps due to her golden locks or perhaps a treasure she is hiding?

There is also a bit of a romantic theme to this game and this is given away deliberately by the handsome man and rose symbols!

I do enjoy a bit of fantasy so this game really grabbed my attention when I came across it.

It is a 5 reel slot game and comes with some interesting features like free spins and super stacks. 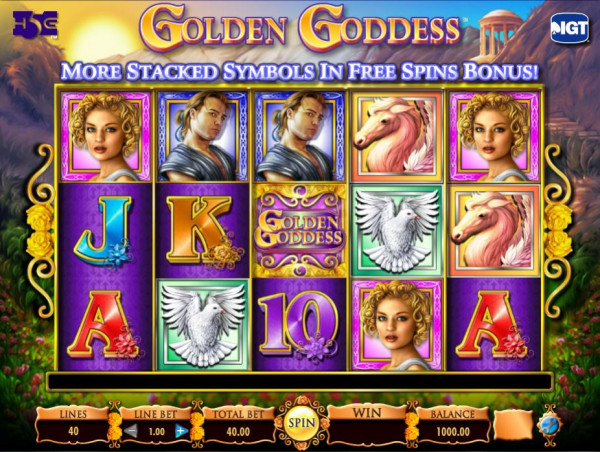 The first feature that I noticed while playing this game was the Wild Symbol which is depicted as the Golden Goddess game logo. This can substitute for all symbols except the bonus symbol and if you land 5 Wild Symbols on an active reel then you will be awarded a nice return of 1000 coins.

The game also incorporates a Super Stacks feature. At the beginning of each spin, the reels contain stacks of symbols that will transform into the same symbol when you successfully land on a few of them adjacent to each other. You will pay tribute to the Golden Goddess for this feature as if you can land some super stacked symbols on multiple reels then you are in for a big win!

A red rose is the bonus symbol in the game and it will only appear on reels 2, 3 and 4.
If you land 3 or more then you will trigger the Free Spins feature. This feature awards you with 7 free spins. You will then be given the option of choosing a rose from the reels to reveal a symbol. The cool thing about this feature is that all symbol positions in all stacks will transform into the revealed symbol for all free spins. Unfortunately, it is not possible to get additional free spins when this feature is in play as no Bonus symbols will appear on the reels.

The game is a visual feast for the eyes with brightly coloured symbols, a beautiful sunlit background and a Greek dome in the distance.

The reels move along really smoothly and the animations are a joy to watch.

The music has a nice fairytale vibe to it with drums and flutes a plenty. I also noticed birds chirping in the distance as well as some nice harp melodies.

Below is a summary took from the PayOut Table from the game. The amount won for each combination depends on the value of the bet when you spin the reels.


Our Verdict on Golden Goddess

Golden Goddess is produced by IGT and it is an interesting twist on Greek mythology especially with Pink Horses showing up as symbols on the reels!

With the option of betting up to a maximum of £200, there are some big rewards to be had here and you know what they say...the bigger the risk the greater the reward!

Get ready to be enthralled by the Golden Goddess and her beauty.

Seek out the Golden Goddess and a glorious fortune awaits you!