Hang out with a bunch of Kings, Queens, and Princes to see if they will share their vast fortunes with you.
booming games casino game review golden royals slots

Put your best socks on and get ready to step into the shoes of a true royal aristocrat in this new slot release from top software studio Booming Games. Monarchies and royal families are famous all across the world as they are known to be far more wealthy than most average folk and some even own enough land to create their very own royal country! Golden Royals invites players to schmooze it up with an assortment of esteemed kings, royal queens, and rich princes in the hope that they share their wealth with you when you start spinning the reels in this game.

Golden Royals is a 5 reel slot with 30 paylines that includes Free Spins, Random Wild Multipliers, and a Corner Kings feature. 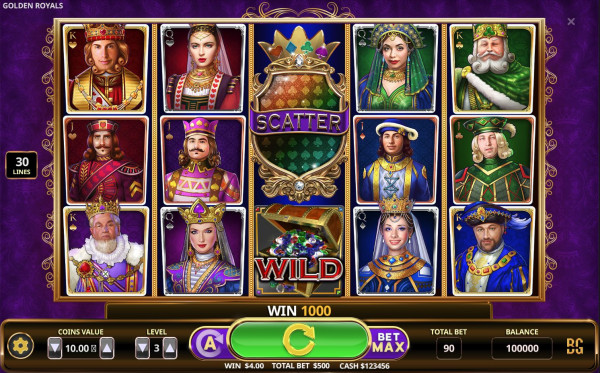 The first feature I encountered while playing this game is the Wild symbol which is represented by an image of a treasure chest full of diamonds and jewels. Like most Wilds, this symbol substitutes for all symbols except the Scatter and Scatter+1 symbols. Keep your eyes peeled for the Wild when it lands on the reels as it is the highest paying symbol in the game. Land 5 of these symbols on an active payline placing the highest bet available and you will be living it up like royalty with a payout worth a whopping 4,000 coins!

An image of a royal crest or emblem that’s 2 cells high is the Scatter symbol in this game and if you land 3 or more these symbols anywhere on the reels then you will trigger the Free Spins bonus game. The more Scatters you land then the more Free Spins you will be awarded. 3, 4, or 5 Scatters award 5, 10, or 15 Free Spins respectively. Additional Free Spins can be awarded during Free Spins by landing the Scatter+1 symbol. Random Wild Multipliers also appear in this feature to further boost your wins as they can multiply your Free Spins winnings by 2X, 3X, 5X, or 7X.

The standout attraction of this slot is the highly innovative Corner Kings feature. This triggers when you land the Kings symbol in 3 or 4 corners of the gameboard. When this happens, you will receive a royal prize worth a tidy little fortune. This feature is active in Free Spins and it is worth highlighting that the Wild symbol does not substitute for King symbols when triggering a Corner Kings payout.

The presentation of the game is quite the regal affair as it takes place on a plush purple background with intricate gold designs surrounding the reels. Symbols are wonderfully rendered onscreen and consist of a bunch of different Kings, Queens, and Princes. Each character is individually designed with each one striking their own royal pose. The animations are stylish as symbols zip up and down the reels rapidly and sparkle brightly when part of a winning combination.

The music is atmospheric and very catchy. It ties in really well with the royal theme of the game.


Our Verdict on Golden Royals

Golden Royals is produced by Booming Games and is a very entertaining game to play. It features top-notch graphics, a soaring soundtrack, and a nice range of bonus features to keep players glued to the reels. The Corner Kings feature is an excellent addition to this slot and I found it triggered quite frequently the more you spin the reels. The Free Spins feature, on the other hand, took quite a bit of time to activate but your patience is nicely rewarded with Random Wild Multipliers as high as 7X for every Free Spin and it’s just fantastic that the Corner Kings feature is also active here. I found this slot to be of Medium variance so expect to land lots of decent sized cash prizes quite often the more you play. For slots with a similar royal theme, check out King Colossus and Gold King.

Live the life of a king or queen to win a regal-sized fortune when you play Golden Royals!