Travel back in time to the 1920s to experience Art Deco at its finest in this fun fruit machine based slot from NetEnt!
casino game review grand spinn grand spinn superpot jackpot slots netent slots

Take a trip back in time to the 1920s to when Art Deco was at its peak in this fascinating release from software giants NetEnt. Art Deco for those who don’t know is a unique style of visual arts, architecture, and design that first appeared in France just before World War I. It combined modern styles with expert craftsmanship and rich materials and was all about epitomising luxury and glamour back in the day. It is in fact considered one of the first truly international styles but unfortunately, its popularity ended just as World War II began. Let’s find out if this Art Deco themed online slot is worth a few spins of your time? 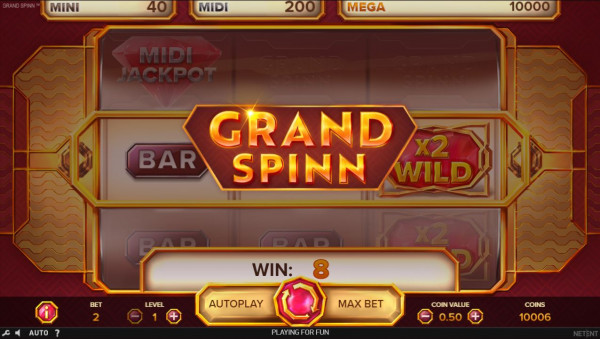 Grand Spinn plays just like a classic fruit machine as it features only 1 payline and a raft of fruit machine inspired symbols. These include Cherries, Plums, Oranges, Lucky 7s, and Watermelons. The most lucrative symbol of these is the Lucky 7 as it pays out 20X your wager for landing 3 on a payline.

Forming a win in this game is super easy as all that’s required is to land identical symbols across all 3 reels. When you do form a win then the Nudge feature will activate. After a win is formed, if the top symbol on the first reel is the same as the winning symbol then the first reel will proceed to move 1 symbol down to award another win. The reel will nudge until the symbol above the winning symbol is different. Amazingly, this feature continues for the second reel and third reel as well. When the reels stop nudging, an Up arrow may appear at the top of one of the reels and when this happens then the reel will move to the bottom of the current stack of winning symbols. The reels will nudge and then pay out from this position.

The Wild symbol in the game is represented by a gold frame with text ‘x2 Wild’ displayed inside. This symbol can appear anywhere on the reels and substitutes for all other symbols apart from the Up arrow symbol and Jackpot symbols. When this symbol is part of a win then it will multiply your win by 2, two Multiplier Wilds will quadruple your win, and if you get three Multiplier Wilds then your win will be boosted by a nice 8X multiplier!

Grand Spinn features 3 fixed jackpots which consist of the following:

Visually, the game is clearly inspired by Art Deco as the action takes place in front of a thin gold frame featuring a layered design along with red velvet curtains placed on opposite sides of the reels. It’s a contemporary and rather sophisticated twist on Art Deco. Symbols in the game are comprised of classic fruit machine symbols such as Watermelons, Lucky 7s, Oranges, Plums, Cherries, and Bars. They are expertly designed and full of detail. The animations are also worth a mention as symbols speed down the reels rapidly and flash and enlarge when part of a winning combination. It is especially exciting when the Nudge feature kicks in as the reels nudge up and down to award additional wins.

The game incorporates an easy-going piano style soundtrack which plays softly in the background. It works really well with the Art theme of the game.


Our Verdict on Grand Spinn

This fruit machine inspired slot comes from NetEnt and is yet another solid offering from the company. It features lavish graphics, a gentle soundtrack, interesting bonus features, and most important of all exciting gameplay. The Nudge feature certainly keeps the action flowing nicely on the reels and can be extremely lucrative when you string a few nudges together. It’s fantastic that the Wild symbol can multiply your winnings by up to 8X and this symbol is key to landing the top prize in the game which is a whopping 7,040X your stake! To do this, you will need to have the 8X Multiplier in play along with getting the maximum number of nudges. It’s also great that you can land one of 3 Fixed Jackpots but sadly I was not able to get my hands on any of them! For variance, it is High so make sure to bring lots of bankroll before spinning this fruit machine slot. In closing, I would opt for this version of Grand Spinn rather than Grand Spinn Superpot as the chances you will win the progressive jackpot are extremely slim coupled with the fact that you can still win an enormous 10,000X your bet with the Mega Jackpot here. For slots with a similar Art theme, check out Da Vinci Diamonds Masterworks and NetEnt’s own slot Turn Your Fortune.