Hall of Gods from NetEnt: Slot Review - a jackpot fit for the gods!

Take a trip to Asgard and help Thor defeat his brother Loki once and for all!
casino game review hall of gods jackpot slots netent slots

Norse mythology is a theme that has been explored many times already by software producers all across the world as they invite players to the mythical land of Asgard which is a beautiful kingdom full of magic, giants, and of course a bunch of Norse Gods! This extremely popular slot from NetEnt was released a few years back and is all about a battle of godly proportions as stepbrothers Odin and Loki lock horns once more while their poor father Odin helplessly watches on. Let’s join the battle and help Thor swing his golden hammer Mjöllnir to victory and hopefully win a nice payout in the process!

Hall of Gods is a 5 reel slot with 20 paylines and comes with Expanding Wilds, Free Spins, 3 Progressive Jackpots, and a Bonus Game. 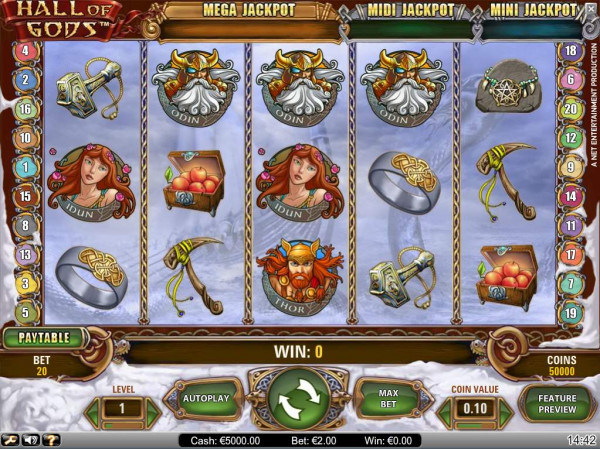 Top Casinos for Hall of Gods

The first feature to highlight is the Wild symbol and is illustrated by a green serpent bearing its fangs. This symbol like most Wild symbols substitutes for all other symbols except the Scatter and Bonus symbols to help form winning combos on the reels. If you land a winning combination involving this symbol on reels 2, 3, or 4 then it will proceed to expand to cover the entire reel to further boost your chances of landing a big win.

The final feature to highlight is by far the most important one and is the Bonus Game. To trigger this feature, you will need to land 3 Bonus symbols anywhere on the reels. The Bonus symbol is denoted by an image of Thor’s Hammer (Mjöllnir) banging on a shield. Once activated, you will be taken to a new screen where you have to smash shields until you reveal 3 matching prizes. This bonus game also offers players the chance to win one of 3 highly lucrative jackpot prizes. So choose your shields wisely and who knows you might just win the Mega Jackpot prize and become an instant millionaire!

More Bonuses for Hall of Gods

The graphics are cartoon-like and a tad dated when compared to more recent slot releases but there is a certain charm about them. The presentation of the game is spot-on as the game takes place in the mythical land of Asgard with reels displaying intricate Norse designs and if you look closely you will notice a huge serpent attacking a Viking ship in the background. Symbols are wonderfully designed and consist of the Norse Gods of Thor, Odin, Freya, Idun, and Loki as well as lower-paying symbols such as Rings, Axes, Hammers, Necklaces, and a peculiar box of apples. The animations are top-notch as symbols enlarge and glow when part of a winning payline and there is great satisfaction to be had when smashing shields in the Bonus Game!

The music is suspenseful and full of loud dramatic drums which kick in every time you spin the reels. It complements the Norse theme of the game superbly.

The game features 20 paylines, a reasonable RTP of 95.5%, a fantastic maximum payout of 4,000X your initial wager, and 3 progressive jackpots.


Our Verdict on Hall of Gods

This fantastic slot is made by acclaimed software developer NetEnt and it’s one of the best Norse mythology themed games you are ever likely to come across. The game is super easy to play thanks to a highly intuitive layout, has some nice visuals, and a fantastic set of bonus features. It’s just great that the Wild symbol expands on certain reels and that Free Spins winnings are trebled. This provides you with ample opportunities to win some big payouts especially when you expand a few Wilds during Free Spins. The standout feature of this slot is the Bonus Game as it offers players the chance to win one of 3 jackpot prizes. These jackpots are highly lucrative with the Mega Jackpot total ranging into the millions so it’s really easy why this game is so popular with jackpot hungry players right now! I found this game to be of Medium variance so you will find that payouts occur quite regularly the more you play. For slots with a similar Norse mythology theme, check out Ice Cave and Viking Runecraft.

Smash some shields to win a gigantic jackpot prize when you play Hall of Gods!