Halloween from Triple Edge Studios: Slot Review - a real killer of a game!

Halloween has arrived and you know what that means...the knife-wielding maniac Michael Myers is on the loose!
casino game review Halloween microgaming slots triple edge studios

I#Halloween is the latest slot release from software studio Triple Edge Studios in partnership with Microgaming which arrives just in time for well you guessed it....Halloween! The game is based on the classic 1978 horror film directed by John Carpenter. The plot of this slasher movie involves famous actress Jamie Lee Curtis running for her life as she tries to escape from the evil killer known as Michael Myers and no it has nothing to do with Austin Powers whatsoever! The movie was made on a measly budget of $300,000 but went on to gross over $70 million and become one of the most famous horror movies of all time.

Halloween has 5 reels with 50 paylines and comes with features such as a Wandering Reel, a Trick or Treat Wheel, a Boogey Man Bonus Game, and Free Spins. 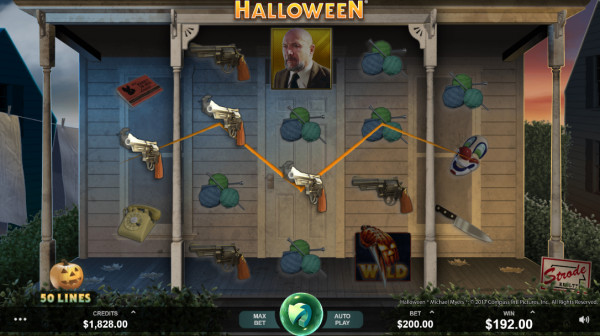 The first thing to highlight is that the game features a ‘Wandering Reel’. This is a highly innovative feature and it involves 3 sets of reels that spin together. The Wandering Reel will stop in one of the 3 positions and this will determine what reels and paylines are played. The most interesting thing about this Reel is that it only contains Jumbo Blocks. The Jumbo Blocks are huge versions of the regular symbols and these symbols will spin on multiple reels. For instance, the Loomis symbol can pop up and display on 3 reels.

The Wild symbol is depicted by the famous logo of the movie and it substitutes for all other symbols except the Bonus symbol which is represented by the word ‘Bonus’ inside an orange and red wheel.

Land 3 or more Bonus symbols on the reels and you will trigger the Trick or Treat Wheel Feature. In this simple game, you get to spin a wheel and it is possible to win cash prizes of up to 10X your initial wager. Continue on spinning the wheel until you land one of the character symbols to trigger more bonus features.

The Boogeyman Bonus game is activated when you land the Michael symbol while in the Trick or Treat Wheel feature. In this mini-game, you need to pick from some leaves to reveal cash prizes with multiplier values. Each time you correctly choose a cash prize, the multiplier will increase by 1. If you manage to find all of the prizes, you’ll be awarded an additional prize of 20X your initial bet. Find the Knife symbol and you will successfully block Michael from ending the Bonus game. However, if you are unlucky and you find Michael then you will only receive half the cash prize amount and the feature will end.

As you might expect from top software studio Triple Edge Studios, the presentation is superb and the graphics are very impressive. The game is set on the porch of the house made famous in the movie and you’ll notice some nice brown Autumn leaves that float over the reels. Symbols consist of the characters from the movie including Laurie, Loomis, Lynda, Annie as well as images of Telephones, Matchboxes, Clown Masks, and Guns. The animations are excellent as symbols burst into life when part of a winning combination and the Wandering Reel mixes things up nicely as huge symbols appear onscreen out of nowhere.

The music has a real sinister tone and is taken straight from the classic Halloween movie soundtrack. It complements the scary theme of the game superbly.


Our Verdict on Halloween

Halloween is made by Triple Edge Studios and it's a fine tribute to a very scary movie. The game is easy to play and I really enjoyed the Wandering Reel feature as it is a fresh new idea and it keeps the excitement levels up as you spin the reels. The Free Spins game is the most lucrative feature in this slot as if you manage to land the Laurie symbol then it is possible to win 500X on just one Free Spin! I found this slot to be of Medium to High variance so it may take you some time before you start seeing a profitable return as you spin the reels.

Escape the Boogeyman to win big in Halloween!