Hellboy from Microgaming: Slot Review - an epic adventure into the Underworld!

Join Hellboy, Abe, Liz, and Professor Broom as they travel through the Underworld searching for the lost Relic of Power.
casino game review hellboy microgaming slots

Hellboy is a very popular superhero created by Mike Mignola. The story behind this red horned demon is that he was born in hell and transported to the Earth realm during World War II. Thankfully, he fights on the side of good as he investigates things that go bump in the night along with his trusty companions Liz Sherman, Abe Sapien, and his adopted father Professor Broom. I was a big fan of the first two Hellboy movies that were released and directed by the genius filmmaker Guillermo Del Toro and I can’t wait to see how David Harbour from Stranger Things gets on when he steps into the big boots of Hellboy in the latest reboot of this lovable rogue. Anyway, onto the game and I promise to be as impartial as possible with this review!

The slot has 5 reels with 20 paylines and comes with an Underworld Bonus Game, a Gamble feature and Free Spins. 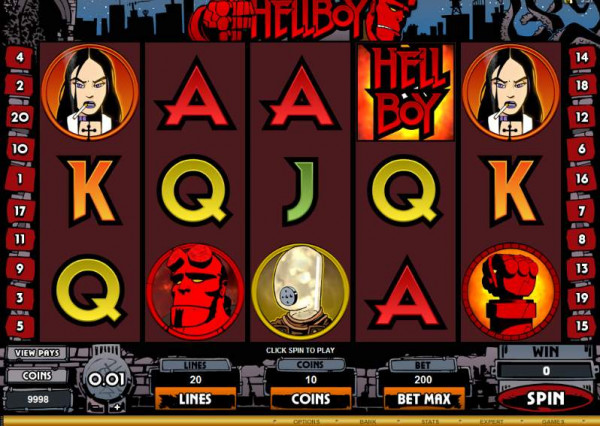 The first feature to highlight is the Wild symbol and it is illustrated by the Hellboy logo. It substitutes for all symbols except the Scatter symbol. Be sure to keep a close eye on this symbol on the reels as it is the highest paying symbol in the game. If you manage to land 5 of these symbols on an active payline then you’ll be treated to a whopping 10,000 coins payout! Another neat feature of this symbol is that if it is part of a winning combination then your win is nicely doubled.

The SuperMode game is a randomly triggered feature and when it is activated, you’ll receive a nice set of 10 Free Spins. During this feature, up to 3 Wild positions are selected and held in place for the duration of the game. Unfortunately, Free Spins cannot be retriggered while in SuperMode.

The Scatter symbol is represented by Hellboy’s famous and indestructible right hand of Doom. If you land 3 or more of these symbols anywhere on the reels then you will trigger the Underworld Bonus Game. This exciting click-me style mini-game involves guiding Hellboy through the Underworld as he searches for the ancient Relic of Power. The game has 4 stages and you need to pick the correct tunnels in order to progress to the next level. You’ll receive bonus prizes for finding team members but if you pick a blocked tunnel then the bonus game will end. Make it all the way to the Chamber of Fire and you’ll get to shoot a crystal to reveal the Relic of Power and win a massive cash prize!

The last feature to discuss is the Gamble game. This is triggered when you land a win on the reels and you will be presented with an option of choosing a colour or suit of a card. If you choose the colour of the card correctly then your win will be doubled but if you like to play it risky and guess the suit correctly then your win will be quadrupled! You can gamble your winnings until the gamble limit has been reached which is set at 5 gambles.

The graphics are absolutely fantastic and a faithful adaptation to one of Dark Horse Comics’ most popular creations. The game is set against a city backdrop with a starry night sky and if you look carefully you’ll notice one of the menacing forest god creatures in the distance as well. Symbols consist of Hellboy, his right hand of Doom, Liz, Abe, Johann Kraus, Professor Broom, and the standard A – 10 icons. The animations are excellent as symbols dart along the reels in furious fashion and the Underworld Bonus game is visually stunning both to look at and to play.

The music is slow, moody, and dramatic. It suits the dark superhero tone of the game nicely.


Our Verdict on Hellboy

Hellboy is produced by Microgaming and it's a wonderful tribute to one of the most underrated superheroes around. The game plays and looks like it jumped straight off the Hellboy comic book panels. The features of the slot provide excellent replay value and the standout attraction of the game is the highly entertaining Underworld Bonus Game. I found Hellboy to be of medium variance and I was able to trigger the bonus features quite frequently. With the opportunity to win up to a maximum 1,800X payout, players are going to love giving this slot a spin or two!

Defeat evil to land yourself a superhero-sized payout in Hellboy!