Hugo 2 from Play'n GO: Slot Review - an off the rail adventure!

Join Hugo as he enters a dangerous cave to take back a treasure that was stolen by the evil witch Afskylia!
casino game review hugo hugo 2 hugo goal hugo's adventure play'n go slots

Hugo is a cute wee troll that hails from Denmark and is hugely popular all over Scandinavia. This adorable little creature has TV shows, video games, and magazines dedicated solely to him so it was a really easy decision for Swedish software developer Play’n GO to release a slot based on this character back in 2016. The game was a huge success as it became one of the most played online slots of 2016 so Play’n GO recently released a follow-up in the hopes of replicating the success of Hugo. This time around, Hugo is on the rail tracks again looking for a treasure that was stolen by the evil witch Afskylia. So get ready for a rip-roaring adventure as we accompany Hugo through a booby-trapped cavern as he steers his mine trolley towards a dangerous cavern to reclaim his stolen treasure.

Hugo 2 has 5 reels with 10 paylines and comes with Troll Race Free Spins and a Skull Cavern Bonus Game. 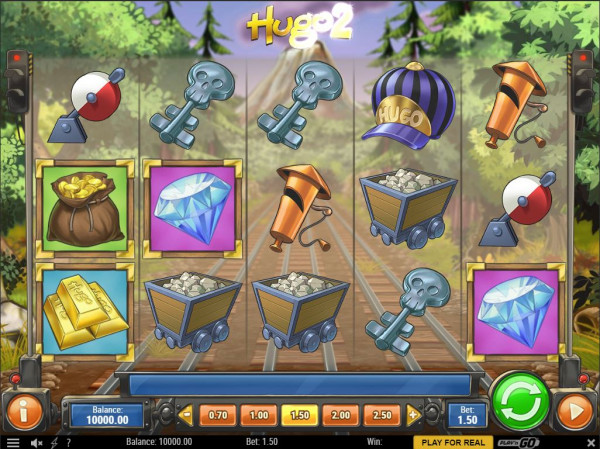 The first feature to highlight is the Wild symbol and this is illustrated by the cute little troll Hugo. Like most Wild symbols, it substitutes for all other symbols apart from the Scatter/Bonus symbols to contribute to winning combinations on the reels. Keep a very close eye on the Wild symbol when you spin the reels as it is also the highest paying symbol in the game. Manage to land 5 of these symbols on an active payline and you’ll be jumping up and down in your mine trolley with a wonderful payout worth 75X your initial wager!

The Scatter symbol is represented by an image of an adorable looking beaver and if you land this symbol on reels 1, 3, and 5 simultaneously then you will trigger the Troll Race Free Spins feature. In this fun mini-game, you’ll receive 10 Free Spins and keep your eyes peeled for the Beaver Cleaver feature which is randomly triggered in this feature. Once activated, you’ll be awarded an additional 5 Free Spins and if it is triggered for a third time then you’ll gain access to the Skull Cavern bonus game and given 3 lives to use in it. As you play the Troll Race mini-game, you can collect up to 2 red bags with the letter ‘W’ displayed on them. When you collect 4 or more bags, 4 Wilds are added to the reels to further increase your chances of landing a big win. You can also collect up to 2 gold coins on each Free Spin and if you collect 4 of them then 4 2X multipliers are added to the reels making it possible to win up to 8X on an active payline.

To trigger the Skull Cavern bonus game you will need to land 3 or more Bonus symbols on the reels or alternatively trigger Beaver Cleaver 3 times while in the Troll Race Free Spins feature. The Bonus symbol is depicted by the nefarious evil witch Akskylia and the more of these symbols that you land then the more lives you will receive for the bonus game. 3 Bonus symbols will give you 1 life, 4 will give you 2 and 5 Bonus symbols will award you 3 lives. The objective of this fun bonus game is to negotiate the treacherous paths of the dangerous Skull Cavern by choosing paths inside the cave. If you successfully reach the treasure chamber and recover the stolen treasure without losing a life then you’ll be awarded a nice 5X multiplier!

The graphics are cartoon-like and filled with lots of colour and dazzling effects. The game takes place on a rail track surround by tall green trees and the track is leading towards a dark looking cave that is no doubt guarded by the evil witch Afskylia. The symbols are beautifully rendered and consist of Hugo, Afskylia, a Beaver, a Hat, a Diamond, a Lever, a Whistle, a Sack of Coins, a Mine Trolley, and some Gold Bars. The animations are top-notch as you might expect from software studio Play’n GO especially when you trigger the two bonus games. Watch Hugo take to the rail track and swerve from all kinds of danger during Free Spins and chuckle as he gets zapped, squashed, frightened by bats, and even swallowed by a treasure chest in the Skull Cavern bonus game!

The music is upbeat and of a playful nature. You’ll also hear from Hugo himself as you play the game. It ties the game nicely together.


Our Verdict on Hugo 2

Play’N GO produced this highly polished slot and it is an absolutely fantastic gaming experience. Hugo 2 features a slick cartoon-like presentation which makes it very appealing to play and it is full of superb bonus games. The Troll Race Free Spins feature is the standout attraction of this slot as it offers players the chance to win multipliers totalling 8X plus additional Free Spins thanks to the Beaver Cleaver random feature. I was able to trigger this feature quite a few times while playing and it is fantastic that you can trigger the Skull Cavern bonus game while in this feature. I really enjoyed how the bonus games take place away from the reels as it breaks the gameplay up nicely. I found this game to be Highly volatile as it offers a top prize of 5,000X your total bet which is quite a big prize offering when you compare it to more volatile online slots out there.

Find a stolen treasure and reap some huge rewards when you play Hugo 2!