It’s time to join Hugo on an all-new adventure in this new release from Play’n GO. In this latest entry to the hugely successful Hugo slot series, we find the lovable Scandinavian troll journeying the skies above and also scuba-diving deep down below in search of hidden treasure. With his friends Hugolina, Monkey, and Eagle at his side, nothing is going to stop this cute little troll from finding a golden submarine full of treasure! Except, of course, Don Croco the evil crocodile who is once again back to thwart Hugo’s mission. Let’s find out if this new game has what it takes to be the best Hugo online slot ever?

Hugo's Adventure has 5 reels with 10 paylines and comes with Free Spins, Walking Wilds, Increasing Multipliers, and a Bonus Game. 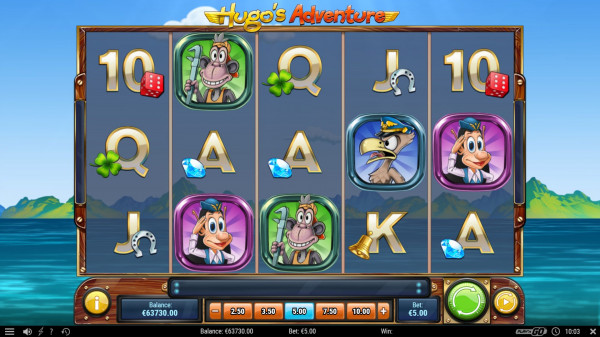 Similar to Hugo and Hugo 2, the game features cute cartoon-like symbols that appear on the reels as you spin them. These include images of Hugolina, Monkey, Eagle, Hugo, along with A – 10 card suits. The most valuable symbol in the game is naturally Hugo who is now dressed up as an Aviator. Land 5 of these symbols on an active payline to claim a decent cash prize worth 50X your total bet. Hugo is also the Wild symbol in the game and substitutes for all other symbols apart from the Scatter to help form winning combinations on the reels.

Hugo’s Adventure comes with 2 exciting bonus games. The first one is the pick-and-click bonus feature Underwater Adventure. To activate it, you will need to land 2 Golden Submarine Scatters on reels 2 and 4 on the same spin. The submarine will then spin to award you 1, 2, or 3 lives. You will then be taken to a new screen where you get to pick from treasure chests in order to win cash prizes. If you manage to finish the feature with some lives intact then you will get to spin a golden submarine wheel that awards multipliers of 2X, 3X, or 5X. These multipliers are then added to the sum of your winnings accumulated in the bonus feature and if you are lucky enough to have had 2 or 3 lives left then the multipliers are combined together to give you an even bigger cash payout.

An image of Hugo’s airplane is the other Scatter symbol in the game and is used to trigger the Air Ace Free Spins bonus game. To trigger it, you will need to land 3 Scatters on reels 1, 3, and 5 on the same spin. Once in, you will be awarded 9 Free Spins and also 1 life. Keep an eye out for the +1 Heart symbol as when it appears on the reels then you will be given an extra life. The main objective of this fun bonus game is to avoid the air mines at all costs as when they strike then you will lose a life. Thankfully, it is possible to claim more Free Spins with up 20 extra Free Spins up for grabs here. During Free Spins, you will spot Extra Balloon symbols containing four 2X multipliers that can multiply together to award a nifty cash prize total worth 16X your wager. The Wild symbol also acts as a Flying Wild during Free Spins as it moves 1 step to the left for every Free Spin. If you manage to finish this bonus feature with 1 or more lives then you will automatically gain access to the Underwater Adventure bonus feature.

For graphics, it is more of the same here as the game features bright and colourful cartoon-like visuals once again. The main setting for this slot is an island surrounded by water, with a wooden frame holding up the reels, a bright clear sky overhead, and if you look at the sea closely then you will spot the legendary golden submarine from time to time. Symbols in the game are wonderfully rendered onscreen and consist of Hugo, Hugolina, Monkey, Eagle, as well as classic A – 10 playing card icons. The animations like other Hugo games are absolutely fantastic and play out just like a real cartoon. It’s especially fun when you trigger the 2 bonus rounds as you help Hugo avoid air mines while also deep diving for treasure deep down below. It adds a nice layer of variety to the gameplay.

The music is charming with a pleasant and upbeat soundtrack playing in the background. It complements the Adventure theme of the game superbly.


Our Verdict on Hugo's Adventure

Play’n GO have done again and created an online slot that’s not only highly entertaining to play but is also the best Hugo game released by the company so far. Featuring beautiful cartoon-like visuals and packed with fantastic bonus games and thrilling gameplay, it’s one slot that will definitely have you pressing that Spin button again and again! The Air Ace and Underwater Adventure bonus games really add to the exciting gameplay with the Air Ace feature being the most profitable as you can benefit from not only Flying Wilds but also multipliers that can reach up to 16X! The top prize on offer here is a massive 5,000X your bet which can be won in the Free Spins feature. For variance, it is High and actually one of the most volatile slots ever released by Play’n GO as it has a rating of 10 out of 10! This essentially means don’t expect to win big too often here. For more underwater adventures on the reels, check out Razor Shark and Great Blue.

Take home the treasures of the legendary golden submarine when you play Hugo's Adventure!