Imperial Opera from Play'n GO: Slot Review - you're the impresario!

Oriental operas are an extremely popular form of drama and musical theatre which dates back to the early periods of Asia. It consists of a variety of art forms that existed in ancient Asia and has evolved over the last thousand years into a spectacle that is both popular with Asian folk as well as tourists. Oriental operas usually encompass various art forms such as music, song and dance, martial arts, as well as acrobatics to tell a story based on Asian folklore. Leading software studio Play’n GO decided to base this slot on this highly entertaining attraction. So grab your ticket and get ready for an unforgettable night at the opera house!

Imperial Opera has 5 reels with 20 paylines and comes with Free Spins, Mega Symbols, and 3 Bonus Features: Showcase, Harmony, and Crescendo. 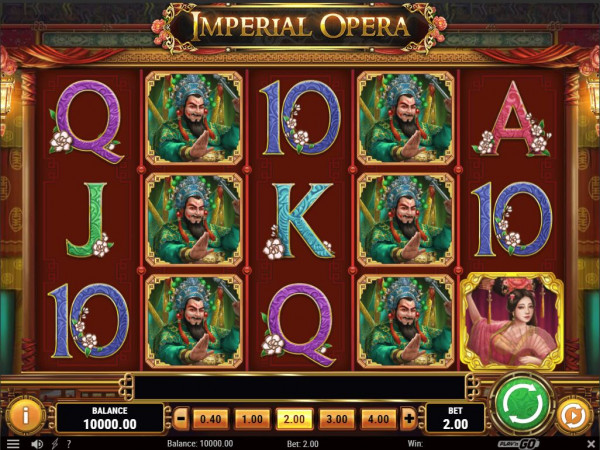 The first feature to highlight is that the game features Mega Symbols. This basically means that any character symbol can appear as a 3x3 large block on the reels on any spin which can dramatically increase your chances of landing a big payout. The Wild symbol is illustrated by a beautiful princess with a pink background. Like standard Wild symbols, this symbol substitutes for all other symbols apart from the Scatter to help form winning combinations on the reels. The Wild symbol is also the highest paying symbol in the game as if you happen to land 5 of these symbols on an active payline then you will bag yourself a wonderful payout worth 25X your initial bet!

Imperial Opera contains 3 bonus features. The first one is the Showcase feature. On every spin, a stack of one randomly chosen symbol apart from the Scatter symbol will be added to the reels to boost your chances of landing a winning combo. The second feature is Crescendo which is randomly triggered and once activated either 1 or 2 reels are chosen at random and transform into Wild Reels. The third feature is Harmony and is also a randomly triggered event. When it activates, between 2 and 3 adjacent reels are chosen at random and will synchronise to display the same symbols. The Harmony feature is also used to activate the Free Spins bonus game.

The Scatter symbol is represented by a large 3x3 golden gong and when it appears fully on the reels during the Harmony feature then you will activate the Free Spins bonus game. Here, you will be awarded 10 Free Spins and reels 2, 3, and 4 will appear locked together with matching symbols to really boost your chances of landing a nice windfall on the reels. It’s also possible to retrigger this feature by landing the large Scatter symbol on the middle reels while in Free Spins.

The graphics are top-notch as the game is set inside a beautifully designed oriental opera house that’s draped with fine silks and lit by numerous glowing lanterns. The symbols are nicely detailed and consist of a Princess, a few Male opera actors, and the usual A -10 icons. The animations are slick as symbols dart up and down the reels and burst into life spectacularly when part of a winning combination. I really enjoyed how the lanterns and the reels light up and dazzle brightly whenever you trigger the Free Spins bonus game.

The music is enchanting with a distinctly Asian flavour. It complements the Oriental theme of the game perfectly.


Our Verdict on Imperial Opera

Play’n GO produced this slot and it’s certainly one trip to an opera house you won’t forget anytime soon! The game is easy enough to play, features exquisite graphics full of colour and detail, and contains a slew of amazing bonus features. It’s great the game utilises a few random bonus events and the Mega Symbols ensure that things never get boring as you spin the reels. I was able to trigger the Free Spins feature quite a few times while playing and it’s just fantastic that the Showcase feature is active here as it’s possible to win up to a whopping 2,500X on every Free Spin! I found this game to be of High variance so you will have to endure quite a few dry spins before you land a profitable return on the reels. For slots with a similar Asian theme, check out Jade Idol and Emperor’s Gold.

End things on a high note by winning a large payout when you play Imperial Opera!