Take a trip back in time to witness one of the largest empires in the world, the Inca Empire!
casino game review jaguar temple slots thunderkick

The Incan Empire was one of the biggest empires to ever exist in pre-Columbian America. It arose from the highlands of Peru sometime in the early 13th century. The Incan Empire was well known for its wonderfully designed architecture, extensive road network, finely-woven textures, as well as many agricultural innovations in farming. To the Inca Empire, the Jaguar represented royalty and power. So much so in fact that their kings wore Jaguar skins as part of their ceremonial attire! This latest release from top software studio Thunderkick is inspired by the Incan Empire as it is set deep inside an ancient Inca Temple where a huge Jaguar monument keeps a close eye on all who dare step foot inside. 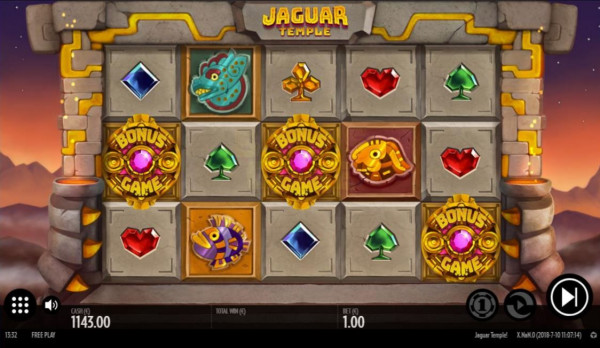 The first feature to highlight is the Wild symbol and this symbol is represented by an image of an Incan Priest. Similar to most Wild symbols, it replaces all other symbols except for the Scatter to help form winning combinations on the reels.

The most profitable symbol in the game is the Jaguar symbol as if you manage to land 5 of these symbols on a winning payline then you will bag yourself a fantastic payout worth 50X your stake! A neat feature of this symbol as that it can randomly appear on the 3 middle reels as a massive 3x3 symbol to further boost your chances of landing a big win.

In addition to all these Free Spins, the massive 3x3 Jaguar symbol will also appear more regularly on the reels. Moreover, the Wild symbol also comes into the play in this bonus game as it will appear on the 3 middle reels and when it does it will then expand to give you a fully Wild reel. This makes it possible to get 3 Wild reels on a single Free Spin to really increase the odds of landing a massive cash prize on the reels.

The graphics are nicely polished as the game is set in front of the entrance to a large Inca Temple with a starry lit sky overhead. If you look closely at the far opposite sides of the reels, you will notice the paws of a Jaguar holding two cauldrons emitting a magical orange glow. It’s a nice visual touch to this magnificent creature revered by the Inca civilisation. Symbols consist of a Jaguar, a Priest, a Fish, a Dog, a Rabbit, a Bird, and the standard Hearts/Diamonds/Spades/ Clubs icons. The animations are smooth as symbols highlight with a bright orange frame whenever they are part of a winning payline.

The music is atmospheric and full of melodic drum effects. It ties in really well with the fast-paced nature of the game.

The game has 20 paylines, an above average RTP of 96.1%, and a fantastic maximum payout worth 2,045X your initial bet.


Our Verdict on Jaguar Temple

Jaguar Temple is produced by Swedish based software studio Thunderkick and is a fun-filled gaming experience. It’s very easy to play, features outstanding graphics, and has a decent amount of bonus features to keep most players inside this temple for a long time to come! I found that the Mega Jaguar symbol did not show up as often as I would have liked it to but it did show up way more frequently when I triggered the Free Spins bonus feature. Speaking of Free Spins, this is the most lucrative feature of the game as you can land up to 3 Wild reels on each Free Spin which makes it even more possible to get your hands on the lucrative top prize of 2,045X your total bet. When it comes to variance, I found this slot to be Medium so you will find that wins are evenly distributed the more you play. For slots with a similar ancient civilisation theme, check out Chilli Chilli Bang Bang and Aztec Warrior Princess.

Seek out untold riches beyond your imagination when you enter the Jaguar Temple!