This GamingRevolution review has tested NextGen's slot game James Dean and found its multiplier functionality to be impressive, and above all rather profitable. During free spins, this game, available in most online casinos, provides the most impressive multipliers.
casino game review james dean nextgen gaming scientific games slots

James Dean, developed by NextGen Gaming, contains five reels and 25 paylines. The initial soundtrack that greets players upon starting the game may be a little too rock'n roll for some, but luckily it tones down once the player starts the online game by pressing the green button. 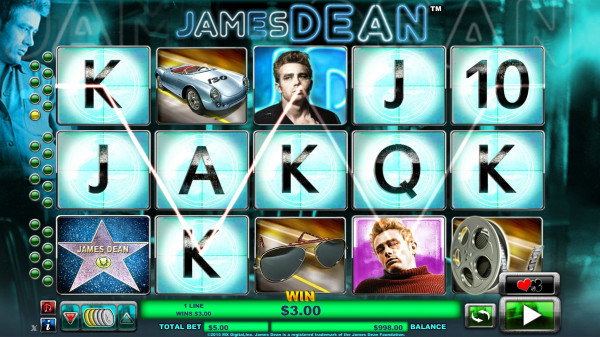 One of the symbols that no player wants to miss out on when playing this NextGen slot game is the Walk of Fame Star Symbol. If a player receives three or more of these symbols, he will be awarded ten free games, and the prizes will be doubled.

This, however, isn't all... and you will see why James Dean is such a popular online game. Whenever a player received five of these symbols his winnings during these rounds are multiplied by 250. Next, there is the symbol, which shows James Dean looking rather dapper in an orange polo-neck. A player's bet is multiplied by 150 if three of these appear, and if they appear during free spins, then it's 300 times. If that wasn't all, during legend spin – which is triggered when a player receives the clapper symbol – winnings can reach the 750-fold.
This is the big highlight in James Dean. The multipliers are great, while a number of free spins are average.

The background shows the 1950s rebel movie star, James Dean, lurking in the dark, the main screen illuminated in bright blue. Surprise, surprise... the symbols depict items one would associate with James Dean, including sun glasses, a movie reel and a motor bike. As well as the iconic Walk of Fame star for James Dean.

With these impressive multipliers, almost any coin and bet level will do. Of course, the higher the bet is, the more you will win.

Unsurprising, it is unlikely that players will receive the super multiplier of 750. However, along the way, they should hit 'something'. As James Dean once said: "The gratification comes in the doing, not the result."

Our Verdict on James Dean

This online game is a little different and offers a variety of way to win. NextGen Gaming is simply much more niche than the super large software providers, who tend to draw on the very same systems time and time again. For that reason, James Dean brings versatility to your online casino experience. With its good multipliers, it is a slot game that caters for all players - from hawks to mice.