This new release from popular software studio ELK Studios invites players to team up with Mr. Lake as he plots a daring raid on Romano tower to rescue a monkey before it’s too late. This game is a clever take on the Ocean’s Eleven franchise (Lake’s Five get it?) with clever animals taking the place of Danny Ocean and company. For instance, Mr. Lake is a street-smart moose who teams up with his motley crew of animal companions to stop Mr. Romano. The team consists of Genie the goldfish, Pete the parrot, Mike the monkey, Alf the alligator, and Elmer the Elephant. Mr. Lake will have to use all their considerable talents if he wants to break into the heavily guarded office found at the top of Romano tower to save the monkey and empty Mr. Romano’s huge treasure vault in the process. So get ready to pull off the heist of the century in this game and hopefully walk away with a monkey and a tonne of cash in your pocket! 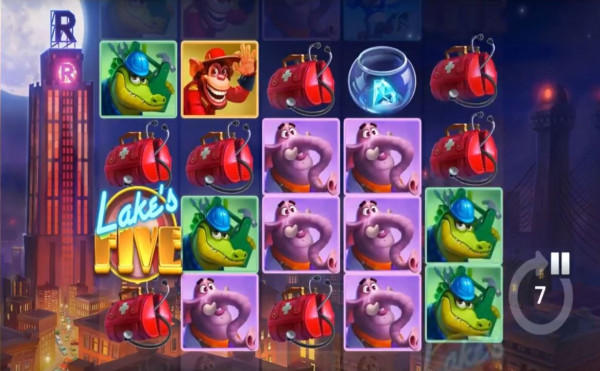 The first feature to discuss is that the game features a fantastic 178 ways to win which offers players ample opportunities to score some huge wins on the reels.

The Scatter symbol in this game is represented by the game logo and if you manage to land 3 of these symbols on the reels then you will trigger the Heist Bonus Game. In this fun feature, players are awarded 10 Free Spins and the main objective of this bonus game is to collect golden keys to unlock cascading wild features and to get additional spins. If you manage to collect 3 golden keys on reel 1 then you will unlock the Walking Wild feature where Wilds will move 1 to the right after every Free Spin. Collect 3 keys on reel 3 and you will unlock the Sticky Wilds feature where the Wilds will remain in place for the duration of the bonus game. Finally, if you collect 3 keys on reel 5 then you will unlock the Climbing Wild feature where Wilds move upwards 1 row at a time on every Free Spin. If any Wild symbols cross paths and end up in the same position then this will create a 2X or 3X Wild which is added to that Free Spin. If you are lucky enough to unlock all 3 Wild features then the monkey in the cage is released and you are treated to a disco-style celebration sequence. It is also worth mentioning that for every golden key generated in this feature, you will be awarded 1 extra Free Spin.

The final feature to mention is the Respins feature. This is triggered when you land 2 Scatters anywhere on the reels and when this happens then the Wild symbol will appear to turn the Scatters into Respin Wilds. The Wild symbol in this game is represented by an image of Mr. Lake. The reels displaying Wild symbols will move one step downwards for every Respin and the Respins continue until the Heist Bonus Game is triggered or until only 1 Scatter remains on the reels.

Like most ELK Studio games, the presentation of this game is absolutely fantastic. The game is played in front of Mr. Romano’s brightly lit building with moving security spotlights and a misty night sky. Symbols are beautifully rendered and consist of a range of talking animals such as Mr. Lake the Moose, Pete the Parrot, Genie the Goldfish, Alf the Alligator, Elmer the Elephant, and Mike the Monkey. The animations are excellent as symbols pop brightly when part of a winning combination and when you load the game up, you are treated to a fantastic intro video of Lake’s Five as they prepare to take down Mr. Romano. I also liked how the Heist Bonus Game takes place on a new set of reels inside Mr. Romano’s office which is filled with stuffed animals.

The music is kind of lounge-style with melodic piano beats and lots of background traffic noises. It ties in really well with the heist theme of the game.


Our Verdict on Lake's Five

This cracking online slot is made by leading software provider ELK Studios and it’s one heist game we highly recommend checking out. It’s a fun and unique take on the Ocean’s Eleven franchise and really easy to play but quite hard to stop once you start to spin those reels! The bonus features offer plenty of replay value especially the highly lucrative Heist Bonus Game as I found myself trying to unlock all the Wild features again and again in order to free that poor little monkey in the cage! It’s also nice that you can trigger Respins and additional Free Spins which should greatly increase your chances of landing a big win. I found this slot to be of High variance so you might have to endure a few dry spins before you land a decent payout on the reels. With a massive jackpot of 216,000 coins to aim for, what is stopping you from rescuing that monkey right now? For slots with a similar heist theme, check out Hotline and The Wild Chase.