Join an elite group of soldiers as they seek out lost riches in a cursed Egyptian tomb in this evolutionary online slot!
betsoft gaming casino game review max quest: wrath of ra slots

A mountain of treasure has been found in the lost tombs of Egypt in this brand new Betsoft Gaming release. This hidden place is said to be the living embodiment of the ancient Gods themselves so is both highly valuable and extremely dangerous at the same time! Esteemed professor Finnlay Orgarian has put together a crack team of super soldiers to explore the tombs to see what exactly lurks inside. Unbeknownst to the team, as soon as they have entered the temple they unleashed Ra’s curse and now his reanimated army stands between you and the undiscovered riches of Ancient Egypt. Read on to find all about this action adventure game that’s set to be the next step in the evolution of online slots and gaming.

Max Quest: Wrath of Ra is an isometric shoot’em up game that includes Special Weapons, God Events, Quests, and Leaderboards. 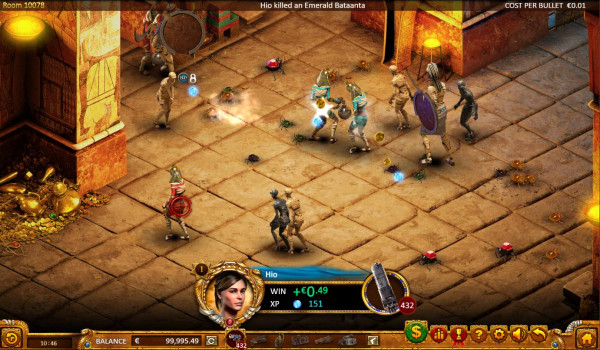 Breaking with tradition, this game does away with reels and symbols to give players an entirely new genre of gaming. Max Quest: Wrath of Ra is played on an isometric setting inside an Ancient Egyptian tomb where instead of using a spin button like most online slots, this game uses a crosshair to shoot bullets at enemies on the screen. Each shot you make is actually a bet. Instead of paylines, bullets that successfully strike the enemies on screen will randomly pay out prizes and also award XP (Experience Points). Do not worry if a bullet misses an enemy in this game as it will either ricochet until it finds a target or returns to the chamber along with your initial bet.

When you load up the game for the first time, you will get to pick your own character and name them and then choose from a variety of Game Rooms. Each Game Room is grouped by the Cost Per Bullet (bet) amount selected in the lobby. The enemies in the game range from low-value scarabs to high-paying Mummies. Enemies contain 7 different types of prizes which are outlined in the paytable and are awarded randomly. From time to time, you may encounter scarabs and mummies covered in fire, these are extremely lucrative targets with the Risen Fire Scarab worth an incredible 2,000X your total bet. So be sure to keep a close eye out for them as you shoot down enemy after enemy!

In Max Quest: Wrath of Ra, there are 5 Special Weapons that you can buy from Weapons Crates or are dropped randomly by enemies when they are destroyed. The Crate awards random Special Weapon with bullets. Each Special Weapon has their own pros and cons. For example, the Shotgun can only take down one enemy at a time but causes serious damage. Grenades can explode to damage up to 5 enemies while the Laser Rifle takes down enemies quickly and can also ricochet. The Plasma Rifle is the most powerful weapon in the game as it can blow away a single enemy with just one shot but the downside of this weapon is that you only get one shot with this gun.

At the end of the game round, there is a chance that an Ancient Egyptian God will appear. This is known as the God Event feature. When activated, either Anubis, Osiris, or Ra will rise and destroy all current enemies onscreen to replace them with their own minions. Each God has a special health bar and once you have depleted it then you will receive a nice big payout and a whole lot of XP! Every shot fired at a God has a chance of awarding a prize with Special Weapons offering even bigger cash prizes.

In this game, you can play up to 25 quests at a time and when a quest is completed then you will receive an XP reward to help you level up and progress your position on the system-wide leaderboard. The quests are random with some requiring you to kill a certain amount of enemies or going on a hunt for lost treasure.

Amazingly, this game is also multi-player as you can shoot down mummies and scarabs galore with up to 5 other players at the same time! Having other players on your side certainly helps a great deal when it comes to taking down the Gods and the Fire Risen Mummies! To add even more excitement to this top game, there is a real-time leaderboard that tracks your progress and awards Treasure Chests containing cash prizes for those who place highest on it. 2% of all bets in each games contributes towards a prize pool which is divided among players according to their position on the leaderboard. The leaderboards run for 33 days and then reset to start again. You can check your progress on the leaderboard at any time by simply clicking on the Trophy icon on the bottom toolbar of the game.

Max Quest: Wrath of Ra has a real cinematic feel to it and is unlike any other online slot that has come before it. The presentation of the game is visually stunning as the game takes place inside a hidden Egyptian temple that’s viewed isometrically and filled with lots of gold treasure, mummies, and scarabs. If you look closely at the walls, you will even see intricate hieroglyphic patterns. The enemies in this game are wonderfully designed and consist of a selection of different coloured Scarabs, Mummies, Guards, Warriors as well as 3 fearsome looking Gods. The animations are excellent as mummies slowly stumble around with scarabs scuttling everywhere. In particular, it’s quite satisfying when you defeat an enemy to reveal a pile of treasure coins on the floor or when you defeat a God to reveal an enormous treasure chest instead!

The music is atmospheric and increases in tempo the more you play. It complements the action-adventure theme of the game perfectly.

The game features no paylines or reels, has a fairly decent RTP of 96%, and a top maximum payout worth 5,000X your initial bet.

Below is a summary taken from the PayOut Table from the game. The amount won for each combination depends on the value of the bet when you play the game.


Our Verdict on Max Quest: Wrath of Ra

This game is made by BetSoft Gaming and is a bold new approach to online slots which blends the genres of video games and online slots seamlessly together. Max Quest: Wrath of Ra features unbelievable cinematic style graphics, a stirring soundtrack, and action-packed gameplay to ensure you have an out of this world online slot experience every time you play this game. It’s so much fun it has to be said to select targets to shoot rather than watch reels spinning up and down in a typical online slot, although it might not be for everyone since it is more of a video game than an online slot. A particular highlight for me is that fact you can work together with up to 5 other players to take down enemies and this comes in super handy when you encounter the Gods as their health bars are extremely big! In terms of variance, I found this game to be Medium so it won’t take you too long to receive a nice cash prize for shooting down all those enemies inside that cursed tomb. For games with a similar Ancient Egypt theme, check out Tut's Twister and Coins of Egypt.

Blast and shoot your way to a huge cash prize when you play Max Quest: Wrath of Ra!