Join Travis and his crew as they perform crazy stunts in all manner of vehicles when you play this high-octane slot!
casino game review nitro circus slots yggdrasil gaming

Get ready to witness a whole lot of death-defying stunts in this new release from renowned software studio Yggdrasil Gaming! Nitro Circus is the first ever branded game from the company and is all about a group of crazy men and women who travel the world showcasing their skills by performing insane stunts in all manner of vehicles. For example, one crazy rider performs a high jump inside of a bathtub of all things! Let’s join Travis Pastrana and his bunch of highly trained athletes as they take to the ramps to wow the masses and see if we can nab a big cash payout for taking part in the show! 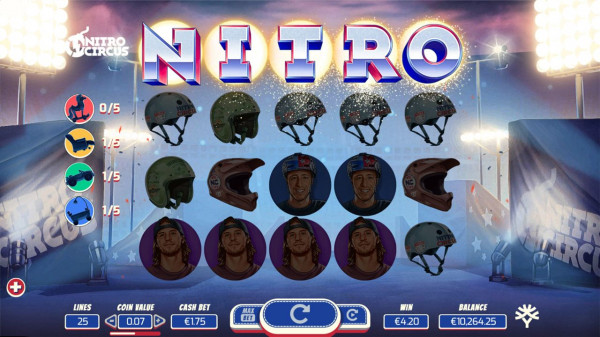 The first special feature to highlight is the Wild symbol which is represented by a golden flame with the word ‘Wild’ displayed inside. This symbol like most Wild symbols, replaces all other symbols except for the Nitro Bomb and Nitro Circus letter symbols to help create winning combinations on the reels.

A blue bomb with the Nitro Circus logo is the Scatter symbol and if you manage to get 2 of these symbols on the reels then you will trigger the Nitro Blast mini-game. In this fun feature, you get to choose 1 of 5 different bombs to reveal the following prizes:

To trigger the Nitro Jump feature, you must land all 5 Nitro letters on the reels in 1 spin. Once activated, you will then get to choose from the following vehicles:

Just like the Nitro Circus show, you will then get to perform 3 warm-up jumps and one real jump in front of the judges. In the warm-up jumps, you can win Coin Prizes, Boosts, Free Spins, and Multipliers. Boosts help you land a bigger multiplier during the real jump, whereas multipliers are applied to all wins. When performing the real jump, you can use the collected Nitro Boosts to increase the speed of your vehicle. The faster you go then the bigger the multipliers become but be warned that if you go too fast then you will crash and come away with nothing!

It is also possible to trigger the Nitro Jump bonus game by collecting 5 identical vehicles on the reels. Each vehicle has its own pros and cons with better tricks giving bigger cash prizes and bigger boosts to give higher multipliers. Here is what each vehicle offers:

The presentation of the game is excellent as it takes place in a large stunt arena with bright flashing lights in the background and riders jumping over ramps as the reels spin. Symbols consist of famous Nitro Circus performers such as Ryan Williams, Andy Bell, Todd Meyn, Travis Pastrana, as well as different coloured Helmets. The animations are superb as symbols burst into life by enlarging and rotating when part of a winning payline. In particular, I really like the cool intro video that kicks in when you load up the game for the first time. It is a nice way of learning all about the world of Nitro Circus if you have never heard of it.

The music is slow rock with lots of slow drum beats used. It complements the action-packed gameplay perfectly.


Our Verdict on Nitro Circus

This slot is made by Yggdrasil Gaming and is a faithful adaptation of the smash-hit stunt show. It’s an excellent start for their first branded game which is hopefully the first of many from this leading software provider. Nitro Circus features dazzling graphics, exciting gameplay, and a stunt arena full of bonus features! I was able to trigger the Nitro Jump mini-game quite a few times while playing and you can land some decent cash prizes and rewarding multipliers here provided that your final jump is a good one! The Free Spins feature, on the other hand, took more time to trigger but your patience is nicely rewarded with Free Spins with 2X multipliers and you can also add more features by activating the Nitro Blast mini-game here. Variance-wise, I found this slot to be Medium so it won’t take you that long to see a profitable return on the reels. For more top slots made by Yggdrasil Gaming, check out Hanzo's Dojo and Wolf Hunters.

Perform wild and crazy stunts on the reels to win a massive fortune when you play Nitro Circus!