Take a trip back in time and hop on board the luxurious Orient Express for a trip of a lifetime!
casino game review orient express slots yggdrasil gaming

Get ready to travel back in time as software producer Yggdrasil Gaming invites players to board the legendary Orient Express. This famous long-distance passenger train was the epitomy of luxury travel back in the day as it would begin its long journey in Paris and end in Istanbul carrying lots of wealthy passengers in the process. It was a showcase of luxury and opulence at a time when travelling was not really comfortable and considered more of a no-frills approach! The glitz and glamour of the Orient Express has inspired dozens of books, tv shows, and movies and just recently the famous Agatha Christie novel ‘Murder on the Orient Express” was released in cinemas to worldwide acclaim.

Orient Express is a 5 reel slot game with 20 paylines and comes with Free Spins, Respins, Walking Wilds, and Wild Reels. 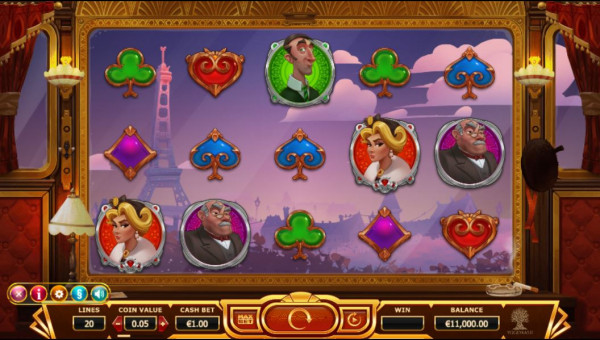 The first feature to highlight is the main Wild symbol and it is represented by the game logo. Like most Wild symbols, the function of this symbol is to substitute for all other symbols except the Free Spins symbol to help form wins on the reels. In addition to this Wild symbol, there are 3 other Wilds which only appear in the Paris, Belgrade, and Istanbul game modes.

Orient Express comes with 4 game modes: Paris, Venice, Belgrade, and Istanbul. Much like the journey of the original Orient Express, the game starts off in Paris and once you’ve completed the Free Spins feature and made it to Istanbul then you are given the option of choosing a city of your choice.

The graphics are clean and colourful and have an almost hand-drawn quality to them. The game takes place inside one of the carriages of the Orient Express and you’ll notice the Eiffel Tower in the background complete with rolling clouds and a beautiful purple lit sky. Symbols are wonderfully detailed and consist of a glamorous looking lady, 3 well-dressed men, and some Heart/Spade/Club/Diamond icons. The animations are impressive as symbols enlarge and move about whenever they are part of a winning combination. I particularly enjoyed watching the Travel Inspector Wild symbol ‘walk’ from reel to reel as you play the game.

The music is enchanting, melodic, and full of accordion and light drum sounds. It suits the travel theme of the game really well.


Our Verdict on Orient Express

Yggdrasil Gaming produced this hugely impressive game and it’s an exciting trip on one of the most famous trains in all of history. The slot has a really easy to play interface, features some nicely polished graphics, and a fine selection of bonus features. It’s fantastic that there are 4 game modes in the game as this breaks up the gameplay quite nicely the more you play. Belgrade and Istanbul are the most lucrative game modes to take advantage of due to the potential of 3 fully Wild reels and having the chance to land up to 12 Wilds on each Free Spin. I found this slot to be of Low to Medium variance so you won’t be waiting too long until you land yourself a nice payout when you play this cracking game.

Travel in style and land a fortune in the process when you play Orient Express!