Travel back in time to the Renaissance period to seek out a gem filled fortune in this superb slot from Play'n GO!
casino game review perfect gems play'n go slots

Head back in time to the Renaissance period to a secret room filled with hidden riches in this latest release from software giants Play’n GO. The Renaissance is a special period in European history that occurred between the 14th and 17th century. It started out as a cultural movement in Italy and later spread to the rest of Europe. It was a “rebirth” of arts, science, and European society and led by famous well-known artists including Michelangelo, Leonardo da Vinci, and Machiavelli and was often viewed as a gateway to a more modern world from the middle ages. An entirely new way of thinking was formed and this led to some of the greatest works of art ever created. Read on to find out if we can find a Renaissance filled fortune full of beautiful gems as we spin the reels in this game?

Perfect Gems is a 6 reel slot with up to 21,609 ways to win that includes Increasing Multipliers, Expanding Reels, Split Symbols, and Free Spins. 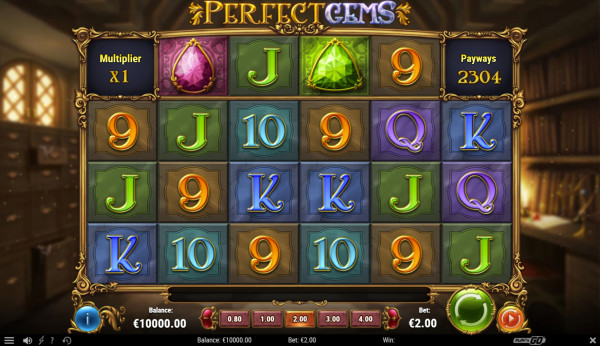 The first feature to talk about is how do you form wins in this game? Well, it is quite easy as all you need to do is land 3 or more matching symbols on the reels. There are in fact multiple ways to win in this game as you will notice an additional horizontal reel across the top of the middle reels along with reels 2, 3, 4, and 5 expanding to 4 symbols per reel. If a symbol on the horizontal reel matches a symbol on the vertical reel below it then it will split into two symbols. This makes it possible to have up to 7 symbols on the extended reels. Incredibly, there are up to 21,609 ways to form winning combinations! This kind of reel system is extremely popular with players and is quite similar to the well-known MegaWays engine used in Big Time Gaming slots such as Extra Chilli and Bonanza.

This game features cascading reels which means when you land a win on the reels then winning symbols will be removed to be replaced by new ones from above. It also comes with a Win Multiplier feature which increases a multiplier by 1 for every consecutive win. This gives you the opportunity to win again and again on the reels but the multiplier value resets whenever you land a non-winning spin.

Perfect Gems comes with a range of sparkling gems displayed as symbols along with a Wild symbol that’s illustrated by a golden frame with the letter ‘W’ inside. This symbol like most Wilds substitutes for all other symbols apart from the Scatter to help form winning combinations.

The Scatter symbol in this slot is represented by a gem encased in a gold flower-like design. Land 3 or more of these symbols to activate the Perfect Spins feature. The more Scatters you land then the more Free Spins you will receive. For instance, 3,4, 5 or 6 Scatters will grant you 9, 15, 21, or 27 Free Spins. During Perfect Spins, an additional Scatter known as the Spin Scatter will appear on the reels and for every Spin Scatter you land then you’ll be awarded 2 Extra Free Spins. Amazingly, there is no limit as to how many Free Spins you can receive. The Win Multiplier value is also carried over into Free Spins and won’t reset until the feature ends. Once more, there are no limits here as to how high the multiplier can go!

Play’n GO always come up trumps in the visual department for their games and this slot is yet another one to add to the list. It is set in a busy Renaissance workspace with old books and opened cabinets displayed on opposite sides of the reels. Symbols in the game are beautifully crafted and consist of an assortment of bright colourful gems along with classic A – 9 icons. The animations are very impressive as symbols drop down neatly onto the reels while symbols fly by on the special horizontal reel placed just above them. It is particularly satisfying whenever you form a win on the reels as symbols explode in dramatic fashion to be replaced by new symbols from above. It really adds to the gameplay.

The music is jaunty with an upbeat soundtrack playing slowly in the background. It increases in tempo as you land more wins which further enhances the overall gaming experience and ties in really nicely with the Renaissance theme of the game.


Our Verdict on Perfect Gems

This game is made by leading software developer Play’n GO and is a beautifully designed slot that’s a whole lot of fun to play. It features superb visuals, a charming soundtrack, as well as a great range of bonus features to enjoy. Admittedly, the reel structure is extremely similar to Big Time Gaming’s own MegaWays game engine but you know what they say...imitation is the greatest form of flattery! The most rewarding feature by far in this slot is the Free Spins feature as you can benefit greatly from not only unlimited Free Spins but also unlimited Multipliers! It is also here where you can win the top prize which is a fantastic 5,000X your initial bet. Variance-wise, this game is most definitely High so make sure to have plenty of bankroll on hand before looking for all those sparkling gems in this game. For slots with a similar Gems theme, check out Gemtastic and Icy Gems.

Expand the reels to win a massive cash payout when you play Perfect Gems!