Join the famous Pied Piper as he returns to Hamelin to rid the town of mice once more.
casino game review pied piper quickspin slots

This latest release from popular software studio Quickspin is a whole new take on the classic story of the Pied Piper of Hamelin. In this version of the story, the Pied Piper has already rid the town of all of the mice but the mice have now returned in large numbers to wreak havoc on the city once more. The King and Queen send for the Pied Piper as he is called into action again to sort out all the wild mice once and for all. The Pied Piper is said to be such an accomplished musician that he can just play his pipe and the mice will follow him anywhere he goes, albeit in a trance-like state. Let’s visit the troubled town of Hamelin and see if the Pied Piper can work some magic on the reels too!

Pied Piper is a 5 reel slot with 40 paylines and comes with features such as Free Spins, Walking Wilds, and Respins. 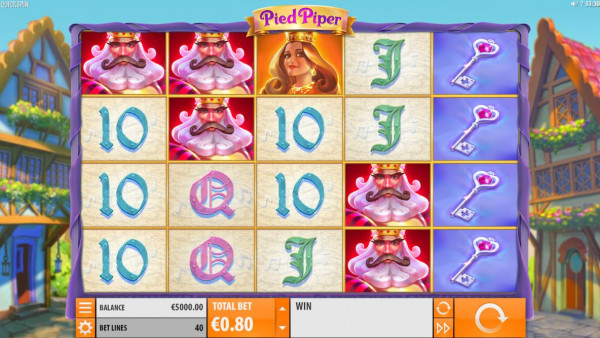 The first feature to highlight is that the game has 2 Wild symbols. The first Wild symbol is a massive 4 x 1 stacked Wild symbol depicting a large image of the Pied Piper. This symbol only appears on reels 3, 4, or 5 and substitutes for all symbols except the Scatter symbol in the game. The second Wild symbol is represented by a cute little mouse and substitutes for all other symbols except the Piper Wild and Scatter symbols to help form winning combinations on the reels. The Mouse Wild symbol is also the highest paying symbol in the game as if you happen to land 5 of these symbols on an active payline then you will be dancing in the streets of Hamelin with a payout worth 20X your total bet!

The Scatter symbol is illustrated by a colourful image of the town of Hamelin. Land 3 of these symbols on reels 2, 3, and 4 and you will trigger the Free Spins feature and be awarded 10 Free Spins. Up to 6 Mouse Wild symbols are also randomly added to the reels for every Free Spin. If the Piper Wild symbol shows up on the reels during Free Spins then the Mystery Respins feature will trigger which should greatly enhance your chances of landing a huge cash payout.

The graphics are visually stunning as the game takes place in the picturesque town of Hamelin with lots of colourful houses and a bright blue sky surrounding the reels. Symbols are beautifully designed and look like they jumped straight out of a Pixar movie. They consist of the Pied Piper, a King, a Queen, a Key, a Princess, a Mouse, a Sack of Money, and the traditional A – 10 icons. The animations are impressive as symbols are covered in a bright orange glow when part of a winning combination on the reels. A highlight for me was watching the mice walk across the reels with the Pied Piper which can be seen whenever you trigger the Respins feature. It is a nice visual touch and a clever wink to the classic story of the Pied Piper of Hamelin.

The music is playful and features a medieval type soundtrack. It complements the fairytale theme of the game really well.


Our Verdict on Pied Piper

This game is made by leading software developer Quickspin and is a very fun slot to play. It features some amazing cartoon-like graphics and has a great range of bonus features to keep many a player spinning the reels for hours on end. The standout attraction of the game is without a doubt the Free Spins feature as not only do you get between 1 – 6 Wilds on every Free Spin but there is also the chance to trigger Respins on top of that! It took me quite some time to trigger this feature but believe me it is definitely worth the wait as the rewards can be massive especially when you trigger the Respins feature during it. I found this slot to be of Medium variance so you will find that wins occur quite regularly the more you play. With a maximum payout of 1,456X your stake to aim for on every spin, what’s stopping you from heading to Hamelin right now? For similar fairy-tale themed slots, check out Rapunzel’s Tower and Jack and the Beanstalk.

Catch all the mice in Hamelin once more to land a huge reward in Pied Piper!