Join a bunch of thrill-seeking adventurers in this first branded release from software producer Pulse 8 Studios in collaboration with gaming giants Microgaming. The explorers in question here are Free Man, Professor Morgan, Nora, and a relic-sniffing dog called Tortas! Their main objective is to make it to the ancient tomb of the Dragon’s Vein where according to legend, an ancient treasure is hidden deep inside. The journey is going to be not only exciting but dangerous too as there are many mechanical traps waiting for them to overcome inside. Let’s accompany the gang to see how far we can make it in this exciting slot? 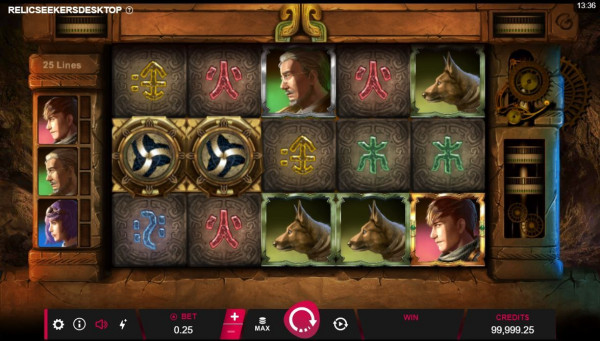 The first feature to highlight is that this game features Rolling Reels. This means that whenever you form a win on the reels then winning symbols are removed to make way for new symbols to appear. The great thing about this rewarding feature is that it can award multiple consecutive wins if you manage to string together a few wins in a row.

Like most online slots, Relic Seekers comes with a Wild symbol which is illustrated by a glowing lantern. The main job of this symbol is to substitute for all other symbols apart from the Scatter to help create winning combinations on the reels.

The Scatter symbol in the game is represented by an image of a Golden Medallion. This symbol pays in any position but is also key to triggering the special Free Spins Bonus Game. Land 3 or more Scatters and you will be awarded 10 Free Spins. If you land 3 or more Scatters while in Free Spins then you will receive an additional 10 Free Spins. During Free Spins, Green Keys will begin to appear on Reel 5. Collect them to not only get extra Free Spins but also cash prizes. For instance, if you manage to collect 6 keys then you will get 2 more Free Spins but also a nice 2X multiplier to go along with it. Pleasingly, the Rolling Reels and Symbols Turn Wild features are also active here to further boost your chances of landing a big win.

For a first branded release from Pulse 8 Studios, the graphics are very impressive as the game takes place on a set of cracked stone reels that are surrounded by cogs and mechanical devices. Symbols feature a crisp and smooth design and consist of Free Man, Professor Morgan, Nora, Tortas, along with a bunch of different coloured runestones. The animations are visually spectacular as symbols flash and then proceed to explode on the reels when they part of a winning combination. A particular highlight is whenever you get 2 Scatters on the first few feels. When this happens then the reels will proceed to grind to halt to ramp up the tension as you wait for the all-important 3rd Scatter to appear so that you can trigger Free Spins.

There is no soundtrack to speak of but there are lots of neat sound effects such as symbols exploding along with the satisfactory ‘thud’ effect whenever symbols land on the reels.


Our Verdict on Relic Seekers

This game comes from Pulse 8 Studios and Microgaming and is a fun treasure hunting adventure that we really enjoyed playing. It features stylish graphics, fast gameplay, along with a nice variety of exciting bonus features. The Rolling Reels game engine offers the chance to win again and again and it’s great that you get rewarded with high-value symbols turning wild for hitting a certain number of wins. The main attraction though is Free Spins as not only can you get plenty of Free Spins but you can also double your wins if you are lucky enough to gather at least 6 Keys. The top prize for this game is a massive 4,500X your stake which can be won in Free Spins with the 2X multiplier in play. In terms of variance, it is High so make sure to bring lots of bankroll before venturing inside the Dragon’s Vein here! For even more Tomb Raiding fun, check out Lara Croft: Temples and Tombs and Mercy of the Gods.

Take home the ultimate treasure when you spin the reels in Relic Seekers!