Reptoids from Yggdrasil Gaming: Slot Review - the truth is out there!

Warp back in time to 1960s America to stop a bunch of evil aliens known as reptoids from taking over the world.
casino game review reptoids slots yggdrasil gaming

Top software developer Yggdrasil Gaming have been on a bit of a roll as of late with a range of stellar new titles. This latest release from the company transports players back in time to America in the 1960s where an alien invasion has begun and it’s up to you to stop it! The aliens in this game are called reptoids and they are quite crafty as they can blend in with humans by transforming into them without batting an eyelid. They have infiltrated top military positions and even taken over the White House! Thanks to your trusty Repto Detector, you will be able to spot these reptoids from a mile away but can you stop these creatures from taking over our planet before it is too late?

Reptoids is a 5 reel slot game with 20 paylines that includes Free Spins, Sticky Wilds, and a Repto Detector feature. 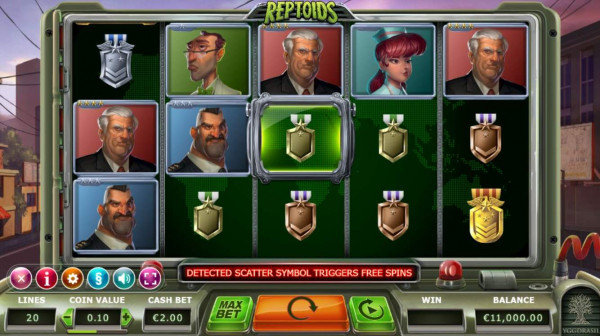 The first feature to discuss is the Wild symbol and this symbol is represented by a gold square that features images of the various reptoids in the game. Like most Wild symbols, it substitutes for all other symbols except the Scatter symbol to help form winning combinations. This symbol is not present on the reels as it can only be created with the Repto Detector feature.

In order to spot Reptoids in the game, you will need a scanner that can detect them and this is where the Repto Detector comes into play. As you spin the reels, you will notice a detector frame that moves to random positions on each spin. When a high paying symbol lands inside the detector frame, it along with all matching symbols on the reels will transform into Wild symbols to reveal the reptoids and also boost your chances quite considerably of landing a big payout.

The Scatter symbol is depicted by a gold coin and this symbol is the highest paying symbol in the game. If you happen to land 5 of these symbols on an active payline then you will be celebrating big time with a payout worth an incredible 100,000 coins! This symbol is also used to trigger the Free Spins bonus game which occurs when you land the Scatter symbol inside the detector frame. Once activated, you will be awarded 7 Free Spins and the Repto Detector is also active in this feature. If you manage to reveal reptoids with the detector then they will become Sticky Wilds for the entire Free Spins feature. Furthermore, you will receive 2 extra Free Spins for every 2 reptoids detected. It is possible to win up to 6 extra Free Spins by uncovering all of the reptoids.

The game features fantastic 1960s retro style graphics and is set in a small town somewhere in America. There is a real Men in Black vibe to it especially with how the aliens or reptoids as they are known are portrayed in this slot. Symbols are wonderfully designed and consist of reptoids hiding in human form such as the President, an Army General, a Nurse, a Scientist, a Reporter, and a Cop. There is also a small selection of military badge symbols. The animations are top-notch especially when the Repto Detector spots a reptoid on the reels and the symbol magically transforms from a human to a reptoid in a stunning sequence. There is also a fantastic action-packed intro video when you load the game up which we highly recommend checking out.

The music is suspenseful with lots of fast piano beats and loud drum sounds. It ties in really well with the sci-fi theme of the game.


Our Verdict on Reptoids

Yggdrasil Gaming created this fun slot and it’s one alien invasion we can’t get enough of! The game looks fantastic, is really easy to play, and contains a superb range of bonus features. The Repto Detector is a highly interesting concept and something that’s never been done before so kudos to Yggdrasil Gaming for implementing this cool feature. The most lucrative feature of the game is Free Spins and it’s just great that you have the chance to land a whole bunch of Sticky Wilds and additional Spins. The only downside is that you can only land up to 6 extra Spins when in this bonus game. I found this slot to be of Medium variance so it won’t take you too long to land a decent enough payout on the reels when you start playing this game. With the chance to win a top prize worth a whopping 5,000X your bet then what's stopping you from halting those aliens right now? For slots with a similar sci-fi theme, check out Reactoonz and Alien Hunter.

Stop an alien invasion to win a massive payout when you play Reptoids!