Travel back to early Japan and join up with a zany samurai as he hacks and slashes his way to glory!
casino game review nextgen gaming samurai split scientific games slots

In Japanese culture, the samurai were known as elite warriors of the ruling classes. In early modern Japan, they were referred to as bushi and this title was more commonly associated with the upper tiers of the warrior class. The samurai were often part of a clan that was ruled by a lord and were trained as officers in military tactics and strategies. Amazingly, the samurai only numbered less than 10% of Japan’s population back then but to this day their teachings can still be found everywhere in Japanese culture. Top software developer NextGen Gaming decided to release this slot to highlight these skilled warriors so that players could take a trip back to early Japan and see firsthand how the samurai closely guarded the country. 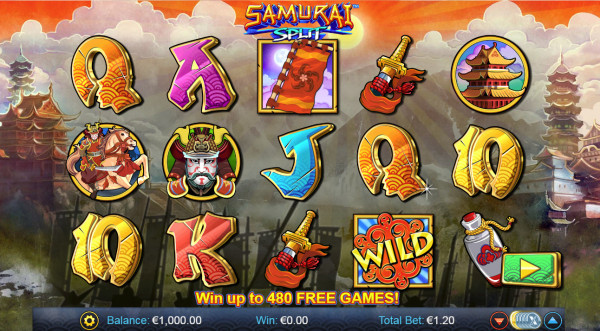 The first feature I came across while playing this game is the Wild symbol and this is represented by a bright orange emblem symbol with the word ‘Wild’ displayed inside. The Wild symbol substitutes for all other symbols apart from the Scatter symbol to help contribute to winning combinations on the reels. This symbol is the second highest paying symbol in the game as if you land 5 of these symbols on an active payline then you’ll be swinging your katana with delight with a nice payout of 500 coins!

Samurai Split incorporates a Split Symbol Bonus feature which is triggered randomly and occurs when you form a win on the reels. Once activated, a samurai will appear on the reels and begin to split one or more symbols in half with his mighty katana. The more symbols that he splits then the bigger the prize becomes. Incredibly, payouts can be multiplied by up to 32X when the samurai shows up and starts splitting symbols.

The Warrior Spin feature is a randomly triggered event that occurs in the main game and when it is activated, all of the low-value symbols (A, J, Q, K, 10) are removed to greatly enhance your chances of landing a big win.

The standout attraction of the game is the Free Games feature. This is triggered by landing 3 or more Scatter symbols in any position on the reels. The Scatter symbol is depicted by a red flowing banner. The more Scatters you land then the more Free Games you’ll receive. Land 3 Scatters to get 5 Free Games, 4 will give you 10 Free Games, and 5 will give you 15 Free Games. If you are lucky enough to land 5 of these symbols and they are then split then it is possible to win up to 480 Free Games! A neat aspect of Free Games is that similar to the Warrior Spin feature, all of the low-value symbols (A, J, Q, K, 10) are removed for each spin to really boost your chances of landing a massive reward. Also, if you land a Scatter winning combination in Free Spins with 1, 2, 3, 4, or 5 Split Symbols then the payout will be nicely multiplied by 2X, 4X, 8X, 16X, or 32X. Free Games can also be retriggered by landing additional Scatters while in this feature.

The graphics are absolutely outstanding and you can tell just by looking at the game that NextGen Gaming spent a lot of time designing it. The game features a breathtaking landscape that is filled with pagodas, lots of samurai holding banners, and some mountains shrouded in white clouds and mist. Symbols are beautifully designed and full of detail and bright colours. They consist of a Samurai Mask, a Horse, a Sword, a Bottle, a Pagoda, and the standard A – 10 icons. The animations are top-notch as symbols enlarge and flash when part of a winning combination. I especially liked it when the quirky samurai warrior appears on the screen and then proceeds to split symbols into two. It’s a real visual treat and a highly original feature.

The slot features a traditional Japanese soundtrack with a few hip-hop beats. It combines really well with the fast-paced nature of the game.


Our Verdict on Samurai Split

Samurai Split is produced by NextGen Gaming and it’s a highly enjoyable slot to play. It is simply beautiful to look at and really easy to get into. The game contains a fantastic range of features that provide countless hours of fun. I really liked how the Warrior Spin and the Split feature are randomly triggered events in the game as this breaks the gameplay up quite nicely. The Splitting mechanic is very original and it’s great when the samurai shows up on screen as you know you are in for a nice payout when he starts swinging his katana! The Free Games feature is the most rewarding feature in the game since low-value symbols are removed on each Free Spin and it is amazing that you can win up to 480 Free Games in total. I found this game to be Highly volatile so you’ll need lots of patience playing this slot but believe me your patience will pay off in the long run as the rewards can be massive!

Fantastic fun in the Land of the Rising Sun when you play Samurai Split!