Secrets of the Phoenix from Gamesys: Slot Review - can you find this mythical creature?

Transport yourself to a mysterious world full of floating temples where a phoenix soars the skies above.
casino game review gamesys secrets of the phoenix slots

This game is all about the legend of the mythical Phoenix bird. This creature was known to rise from the ashes in a blaze of glory. The slot is set in a fantasy world where the Phoenix roams free and soars the skies above. Ancient civilisations worship this glorious bird at a sacred temple and as soon as you start playing this game and see some floating mountains, you will realise you are a long way from home!

It is a 5 reel slot game with 25 paylines and features cascading reels, free spins, and stacked wilds. 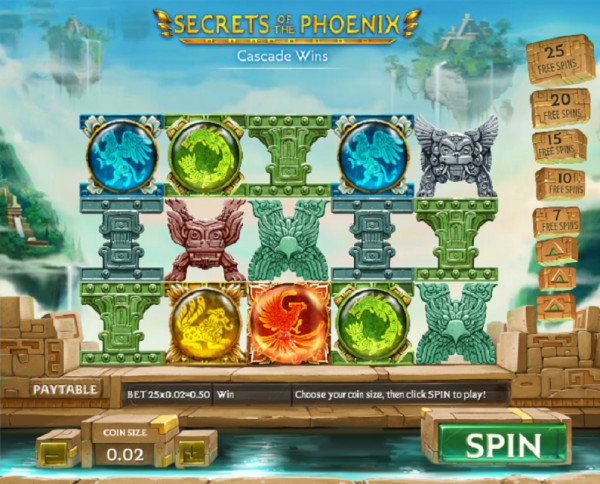 The first thing I encountered while playing this game is that it features cascading reels. Quite a few slots have incorporated this feature and it seems to be getting more and more popular these days. To describe it, it is like playing Tetris rather than spinning reels and watching symbols land into place. I really like playing this way, to be honest and it is a whole new way of playing slots. In Secrets of the Phoenix, any winning symbol combination triggers the reels to cascade, if you clear a whole reel or set of reels then you will create a Wild Phoenix reel. The neat thing about this feature is that it continues until no more winning symbol combinations appear.

The Wild symbol is illustrated by a flaming orange and red Wild Phoenix. As mentioned earlier, whenever all 3 symbols of a reel are involved in a winning combination, those reels become a Wild Phoenix for the next cascade. This symbol substitutes for all symbols except the Scatter symbol. It is also worth noting that Wild Phoenix appears for one cascade only.

Last but not least there is a Free Spins feature in this game. This is triggered when you land 4 or more consecutive cascade wins. The more winning cascades you get before triggering the feature, the more free spins you will earn and it is possible to win up to 25 free spins. A cool thing about this feature is that you can win even more free spins while playing this feature.

The game is nicely polished and the main game is played out on an ancient temple floor. Floating temples and mountains can be seen in the background with clouds interspersed all around. The symbols are beautifully detailed and they are bright and colourful as they tumble down upon each other. The animations are quite interesting as symbols disappear in a puff of smoke when you land a win.

There is no music in this game but there are some nice thud effects as the symbols fall down into place. Some jungle music would have been nice to hear with this slot but that is a minor gripe, to be honest.


Our Verdict on Secrets of the Phoenix

Secrets of the Phoenix is made by Gamesys and it is a really enjoyable slot to play. The presentation of the game is quite something and although there are not that many features in the game, there is enough here to keep players glued for a long time. I really like playing cascading reels games and this is definitely one of the best ones out there right now.

Seek an outworldly treasure in Secrets of the Phoenix!