Shamrockers: Eire to Rock from IGT: Slot Review - grab your clover and rock out with this 5-reel classic

Shamrockers: Eire to Rock by IGT is a slot machine, which combines Irish mythology with music. The 5-reel slot game is available on an array of online casinos, including SlotsMillion, Mr Green and many others.
casino game review igt shamrockers eire to rock slot machine slots

With its clever concept, Shamrockers: Eire to Rock certainly ticks all the boxes of a positive first impression. Especially, when it comes to its design. The graphics are detailed and sleek. As I start the slot game, the journey continues on a high. The game loads smoothly, the reels spin seamlessly and, as is common in IGT games, a great soundtrack plays in the background. 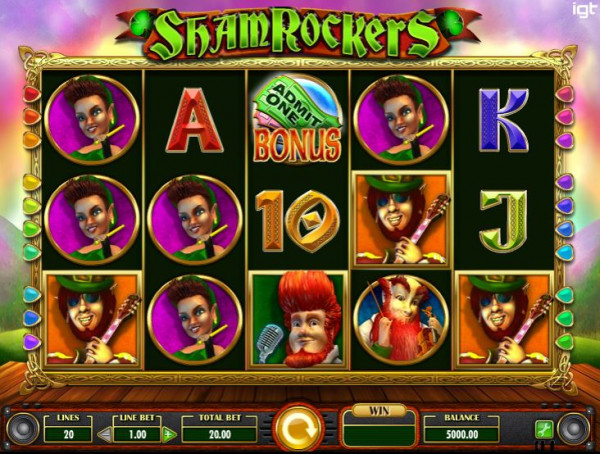 The three-leaf clover is a bright green and wild is written on it, which explains the symbol's function. You certainly aren't able to miss this symbol. This symbol can replace almost all symbols with the intention of forming a winning combination. The only exception to this is the bonus ticket symbol.

This is unsurprising, given that this bonus feature is certainly amongst the most profitable symbols to receive in IGT’s Shamrockers: Eire to Rocks. The feature is activated upon a player receiving a minimum of three ticket symbols. These have to appear anywhere on reels two, three and four and trigger some free spins. While this is pretty standard, these free spins are more than that. With every time a player spins the reels, a different musician is stacked throughout the reels and enables easier winnings. Whether it’s the fiddler, singer, drummer or guitarist, all help to enable further winnings, and on the last of the free spins, every player has the chance to win the game’s golden VIP ticket, which triggers a re-spin.

This is one of IGT’s newer slot games, and – unsurprising – the design features plenty of green in its logo, and a bright and colourful background, which seems to depict a rainbow on the rainy isle of Ireland. However, this isn’t about Shamrocks, but it’s all about Shamrockers. Thus, the symbols are a combination of Irish mythology (including the shamrock) and a band, complete with fiddler and drummers. With 5 reels and 20 paylines, this game is everything one expects from a high-quality slot machine.

Shamrockers: Eire to Rock can be played with low stakes and high stakes alike. It is useful to be aware though that Shamrockers: Eire to Rock is a high variance slot game, which may need a few spins to warm up. Therefore, it may be wise for players to make sure their casino funds last long enough to cash in on some serious winnings. Furthermore, the great game design makes playing this slot game over longer times easy. The colour scheme does not drain your concentration, in fact, the bright colours should heighten your spirits. Bearing all this in mind, decide on your stake based on the length of the game you desire.

Our Verdict on Shamrockers: Eire to Rock

What's not to love about a bit of 'Paddywhackery'? This slot game by IGT is stylish and is bound to become a classic among high-variance slot games. While somehow similar in simplistic set-up to the likes of Starburst, Shamrockers: Eire to Rock stands out as a result of its less frequent, but higher winnings.