Shuffle Bots from Realistic Games: Slot Review - do the robot!

Enter a futuristic nightclub where robots are dancing up a storm below a shiny disco ball when you play this fun slot!
casino game review realistic games shuffle bots slots

Ever wondered what might happen if you combine a bunch of smart robots with dance music? Well, that is exactly what software provider Realistic Games have cooked up in this latest release! Shuffle Bots appropriately takes place on a dance floor filled with bright lights, disco balls, funky music, as well as a whole load of robots eager to strut their stuff and bust out a few moves on the floor. Let’s join the party and see if dancing like a robot will reward us with a nice cash prize?

Shuffle Bots is a 5 reel slot with 20 paylines that comes with Bonus Wilds, Bonus Scatters, and Free Spins. 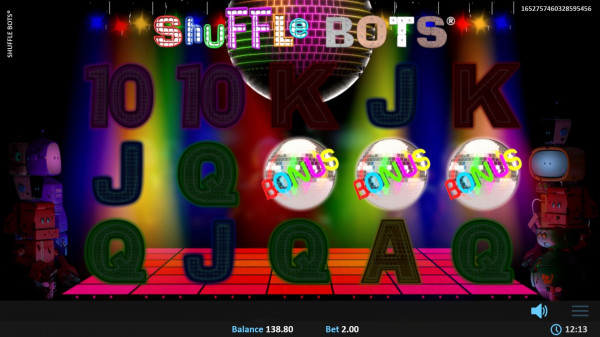 The first feature to discuss is the Wild symbol. This symbol is represented by the word ‘Wild’ in neon-style colours. Like most Wild symbols, it replaces all other symbols except the Scatter symbol to help form winning combinations on the reels. As you play the game, a Cocktail Bot may appear on the reels and when it does then it will add a random number of Wilds to the reels. This is known as the Bonus Wilds feature.

The Scatter symbol is represented by a sparkling disco ball with the word ‘Bonus’ displayed inside. Land 3 or more of these symbols anywhere on the reels to trigger the Shuffling Reels Free Spins feature where you will either receive Free Spins or a Payout. For example, land 3 Scatters to get 5 Free Spins, 4 will give you 10 Free Spins, and if you land 5 Scatters then you will win the top jackpot prize which is worth 250X your stake.

Once in Free Spins, you will get to randomly choose one of the 5 robots to play in the feature. The reels are then filled with additional symbols of the chosen robot along with the low-paying playing card symbols as well as the Wild symbol. No other robot symbols other than the selected one will appear in Free Spins. Following each Free Spin where a win has been achieved, the reels will then shuffle into a new position and if you are lucky then they will pay out again. At the end of Free Spins, the Cocktail Bot may also appear and when it does then it will award a feature repeat where a new robot is chosen and the same number of Free Spins originally won are awarded once more.

The last feature to discuss is the Bonus Scatter feature. As you spin the reels, the large disco ball above the dance floor may rotate to become an additional Scatter symbol! This can come in very handy for triggering the Free Spins feature or for helping you land the top prize in this game.

The game is a real visual assault on the eyes as it is stacked with an array of bright and dazzling colours. Shuffle Bots takes place on a neon-lit disco floor that’s constantly changing colour with a huge disco ball hanging just above and lots of robots eagerly waiting to take to the floor on opposite sides of the reels. Symbols are expertly designed and full of detail and flashy colours. They consist of a bunch of different coloured Robots, a Disco Ball, along with the standard A – 10 icons. The animations are smooth as symbols fly by on the reels and are highlighted by a bright white neon square when part of a winning payline.

The music is loud techno with just a hint of disco. Naturally, it ties in perfectly with the dance theme of the game.

The game features 20 paylines, a rather low RTP of 95.20%, and a maximum payout worth 250X your initial stake.


Our Verdict on Shuffle Bots

Shuffle Bots comes from leading software developer Realistic Games and is a super fun and entertaining game to play. It features bright flashy visuals, a loud electro-style soundtrack, and a decent amount of bonus features to ensure the disco party stays in full flow for as long as possible. Bonus Wilds and Scatters add to the excitement on the reels but the standout feature of this game is the Free Spins bonus feature as you can land some pretty hefty payouts here thanks to the reels shuffling about! In terms of variance, I found this slot to be Medium which means that it won’t take you too long to land a decent cash prize on the reels. For slots with a similar disco theme, check out Disco Bar 7s and Spin Party.

Dance your way to a disco ball-sized fortune when you play Shuffle Bots!