The first thing that will strike you about this game is the futuristic presentation of it all. It looks like it jumped right out of a Tron movie and onto your screen!

There are lots of bright lights, a soft techno beat and a whole host of oddly shaped symbols sit upon the reels. So if you are a bit of a techno head, Tron fan or just enjoy bright lights then this slot should be to your liking.

The game has 5 reels, 15 paylines, and features such as sticky wilds, bonus prizes and space lights. 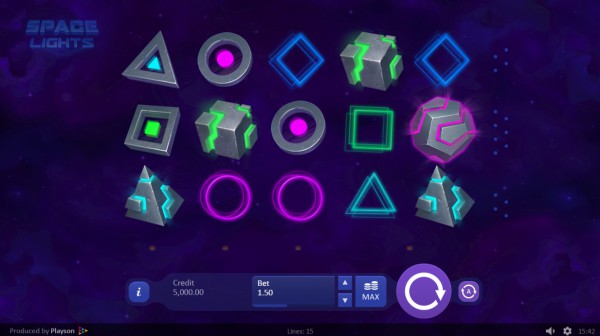 The first thing worth noting is the Wild symbol which is denoted by a W yellow letter. This symbol substitutes for all other symbols. It is the highest paying symbol in the game and you land 5 of these symbols across the reels then you will win a maximum payout of 60,000 coins!

Every time you spin the reels, an orange portal will activate and hover above one reel at random. If the upper symbol on a chosen portal selected reel is part of a winning combination then it transforms into a Sticky Wild and this triggers the Space Light feature. During this feature, Sticky Wilds can trigger respins. The orange portal will distribute the Sticky Wild symbols down but only if the next symbol on the active reel is part of a winning combination. Reels 4 and 5 are activated simultaneously in Space Light and symbols will transform into Sticky Wilds at the same time during this mode. This mode stops when there are no more Sticky Wilds on the active reel. If an active reel is fully filled with Sticky Wild symbols then you will trigger the bonus prize feature.

The bonus prize is calculated by multiplying the value of the counter by the bonus prize multiplier by the bet. The counter is the number of Wild and Sticky Wild symbols added during Space Light mode. There are two multipliers in this feature 2X and 3X. You will get 2X if 2 adjoining winning symbols appear during Space Light mode or appear after a respin. You will get 3X when all the symbols on an active reel are a part of a winning combination and activate the Space Light mode. It can be quite tricky to work out this formula but once you do, it is plain sailing going forward!

The game straps you in tightly and transports you to a future full of neon lights. The graphics are beautiful and the symbols are highly original, featuring cubes, pyramids and squares all decked out with a vibrant neon glow. The symbols move seamlessly along the reels and feature some really sharp animations when a winning combination is formed.

The music as you would expect is quite trance-y and electro but it feels rather relaxing and compliments the theme of the game really well.


Our Verdict on Space Lights

Space Lights is created by Playson and it’s a hypnotic trip into the future that you won’t forget anytime soon! It is really easy to pick up and play but some of the features could have been better explained such as the bonus prize mode. I would definitely recommend giving this game a whirl or two if you like your slots futuristic and full of neon!

Strap yourself in and get ready to play Space Lights!