Enter an enchanted forest to seek out an elusive fairy to win a magical fortune when you play this spellbinding slot!
casino game review realistic games slots spin dizzy

Take an Autumn trip to an enchanted forest full of mystery and wonder in this new title from Realistic Games. As you marvel at the crisp orange and gold leaves that cover the ground and cling onto the trees above you, your main objective in this slot is to seek out a magical woodland fairy. The fairy in question is said to be able to create swirling patterns on the reels as you play and offer plenty of treats and bonuses should you find her. Join us as we step foot inside the mysterious forest to seek out this magical creature and hopefully win lots of cash prizes for doing so! 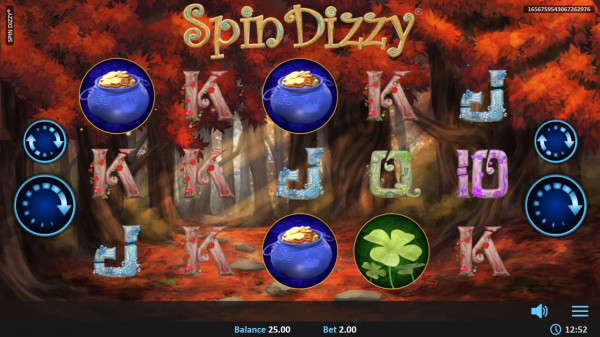 The first feature to discuss is the Wild symbol. This symbol is represented by the word ‘Wild’ inside of a circle surrounded by brown leaves. The main job of this symbol is to replace all other symbols apart from the Scatter to help form winning combinations on the reels. Along with the Jackpot symbol, it is the highest paying symbol in the game. Land 5 of either symbol on an active payline to claim a magical payout worth 250X your stake!

Spin Dizzy features ‘magic’ Spinners that can appear over the reels. The Spinners can display a number of different symbols which can award various bonuses when a feature is active. When a Spinner slows to stop, it will reveal either a symbol or award which substitutes the symbol on the reel below or will do nothing at all. When nothing is displayed, the symbol on the reel behind the Spinner will remain active. This is known as the Spinners feature.

During the main game, a fairy can appear randomly, gifting you a number of Wild Spinners on the reels. These spins will reveal either a Wild symbol or a blank and is referred to as the Spinning Wilds feature. In addition to this, the fairy can also upgrade Wild Spinners to have a 2X or 3X Multiplier to further boost your chances of landing a big win on the reels.

Spin Dizzy also features a random Spinning Matching Symbols bonus feature that can occur on any spin in the base game. Once triggered, a fairy will appear to create a random number of Symbol Spinners over the reels which will all display the same symbol. The symbols change every time the Spinners revolve to show the other side and once they stop then they will all display the same symbol. The great thing about this feature is that it does not feature any blank symbols.

The standout feature of this slot is the Spinning Wilds Free Spins bonus game. This is activated by landing 3 or 4 Scatter symbols anywhere on the reels. The Scatter symbol is depicted by an image of a silver acorn. If you manage to land 4 Scatters to trigger this feature then not only will you get Free Spins but also a whopping 1,000X your stake on top of that! If you are lucky enough to land 5 Scatters then you will skip the Free Spins bonus game and instead win the top prize which is a spectacular 5,000X your wager!

Once in Free Spins, the reels will disappear and 15 Spinners will appear with 1 over where each reel position was. Each Spinner will change what it displays every time it revolves to show the other side and can award Wild symbols, up to 3 Free Spins, or a Wild Multiplier up to 3X. All of the Free Spins are then removed and added to leave only Wild Spinners on the reels. During each Free Spin, the Wild Spinner will spin and when they slow down, they will stop on either the blank side or the Wild side. An additional Wild Spinner is formed if a Wild symbol lands on the reels on a position not occupied by a Wild Spinner. Furthermore, the Wild Multiplier is increased if a Wild lands on a position on the reels where a Wild Spinner is already active. This greatly enhances your chances of landing a big cash prize on the reels. At the end of the Spinning Wilds Free Spins feature, a fairy may appear and if she does then you’ll be granted a Feature Repeat bonus where the entire feature is awarded once more!

The presentation of the game is graphically stunning as it takes place in an enchanted forest in Autumn with sunlight seeping through the trees and lots of orange and bronze coloured leaves everywhere. Symbols are beautifully crafted and consist of a Harp, a Pot of Gold, a Ring, a Clover, some Mushrooms, and your standard A – 10 icons. The animations are top-notch as symbols swirl up and down the reels and are surrounded by a magical white circle of fairy dust when part of a winning combination. I especially like how fireflies or fairies slowly float up to the trees as you spin the reels. It really adds to the gameplay and makes the forest seem that bit more magical.

The music features a soft melodic piano soundtrack. It’s rather charming and suits the fairy theme of the game really well.


Our Verdict on Spin Dizzy

This game is made by top software provider Realistic Games and is one forest we thoroughly enjoyed visiting! Spin Dizzy features sumptuous graphics, excellent gameplay, and the perfect amount of bonus features to keep you enthralled for hours on end. The two random bonus features triggered quite frequently with the fairy helping out nicely by upgrading Wild symbols to have Multipliers all the way up to 3X. The main attraction of this slot is the Free Spins feature which can take a bit of time to trigger but is entirely worth the wait as you can profit from lots of extra Free Spins along with lucrative 3X Wild Multipliers. When it comes to variance, I found this slot to be Medium so you will notice that payouts are evenly distributed the more you play. For slots with a similar magical forest theme, check out Pixies of the Forest and Theatre of Night.

Keep your eyes peeled for the fairy to win really big when you play Spin Dizzy!