The Equalizer from Red Tiger Gaming: Slot Review - a booming hit of a slot!

Get ready for some classic retro gaming fun in this futuristic themed online slot from top software provider Red Tiger Gaming. The setting for this game takes place at night in a city in the not too distant future that’s filled with bright neon purple colours and 3D pixels. It actually looks and feels like a classic 1980s Atari game and is by no way connected to the hit 80s show of the same name starring Edward Woodward which is a pity. Read on to find out if racing a sports car through this pixellated neon-lit city can lead to a rewarding time on the reels?

The Equalizer is a 5 reel slot with 15 paylines that includes Stacked Wilds, Walking Wilds, Expanding Reels, and Free Spins. 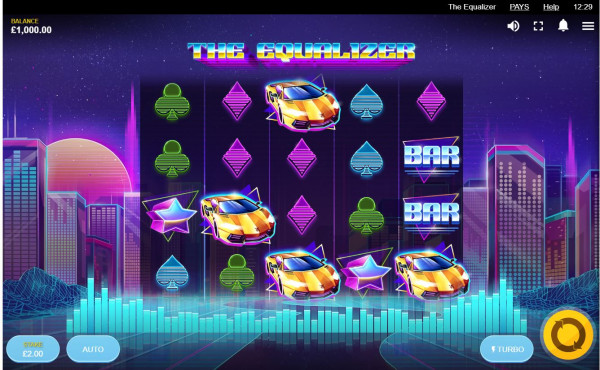 Top Casinos for The Equalizer

More Top Casinos for The Equalizer

The Equalizer features a range of bright neon symbols including Cars, Sparkling Diamonds, Dice, Stars, and classic low-value symbols such as Diamond, Hearts, Spades, and Clubs. The most rewarding symbols by far in this game are the Wild and the Yellow Sports Car symbols. Land 7 of these symbols on an active payline on the reels and you’ll be leaving the city behind with a fine cash payout worth 150X your wager.

In order to get 7 symbol winners, you will need to expand the reels. This is actually triggered randomly via the Expanding Slot feature. When this feature activates then the reels will expand to a maximum of 7 reels complete with 6 rows. It only becomes active for the current spin in the main game. The Wild symbol in this game is represented by the letter ‘W’. This symbol can expand to increase in size up to 6 symbols high when the Expanding Slot feature is in play.

The Equalizer also comes with an entertaining Free Spins bonus game. To trigger it, you will need to land 3 Scatter symbols on the same spin. The Scatter symbol is denoted by an image displaying the words ‘Free Spins’. Once in Free Spins, you will be awarded 10 Free Spins and whenever you land an Expanded Wild on the reels then they will proceed to lock into place for the duration of the feature. Wilds can also move from left to right and if you trigger the Expanding Slot feature then it will remain expanded for the entire feature. Moreover, you can get Extra Free Spins by landing the +Spin Scatter symbol to receive 1 additional Free Spin. The cool thing about this feature is that there are no limits as to how many Free Spins you can receive.

Best Welcome Bonus for The Equalizer

More Bonuses for The Equalizer

Visually, the game looks incredible as it takes place in a purplish glowing neon-lit city featuring tall buildings along with a bright orange sun setting in the distance. You will even spot a giant equalizer sitting just below the reels that reacts to the music and various gameplay features. Naturally, it ties in really well with the theme and name of the game. Symbols in the game are nicely polished and consist of a Sports Car, a Sparkling Diamond, a pair of Dice, a Bar, a Star, along with classic Hearts/Diamonds/Spades/Clubs icons. The animations are wonderful as symbols speed down the reels and pop brightly when part of a winning combination. It’s particularly pleasing when the reels expand as a set of speakers appear that emit a bright blue glow to add extra reels in.

The music is soft techno as it features an 80s inspired electro soundtrack. Needless to say, it compliments the fast-paced gameplay really well.


Our Verdict on The Equalizer

This game is made by acclaimed software developer Red Tiger Gaming and is a fun-filled and entertaining trip to a futuristic city. With a highly original theme, exciting bonus features and superb graphics, this is one slot that Red Tiger Gaming can be extremely proud of. The Expanding Slot feature triggers quite often when playing but this feature really comes into its own when in Free Spins as it is here where it stays in place while you benefit from Sticky Wilds, Expanding Wilds, as well as Extra Free Spins. The Free Spins feature is perhaps one of the most lucrative bonus games that Red Tiger Gaming have ever produced. The top prize for this game is a mind-blowing 10,000X your stake which can be won on each spin. When it comes to variance, this slot is High so make sure to have lots of bankroll on hand before driving to this futuristic city! For slots with a similar 80s Computer Game theme, check out Asteroids and Arcader.

Speed your way to a huge cash payout on the reels when you play The Equalizer!