Celebrate the Chinese Year of the Pig by spinning the reels in this exciting online slot from iSoftBet!
casino game review isoftbet slots the fortune pig

It’s time to party and join in the Chinese New Year celebrations with this new title from acclaimed software studio iSoftBet. This year to mark the year of the pig, the company decided to appropriately theme this slot all around this very lucky animal. The pig is the twelfth of all the zodiac animals and the reason he is the last one is that he was late to the party as he overslept! Allegedly, it was also said that a wolf tore down his house and he had to fix it before attending the party! The pig is a symbol of wealth in Chinese culture so let’s see if he is in the mood to share some of his fortune with us as we spin the reels in this game?

The Fortune Pig is a 5 reel slot with 25 paylines that comes with Free Spins, Stacked Wilds, In-Sync Reels, and Respins. 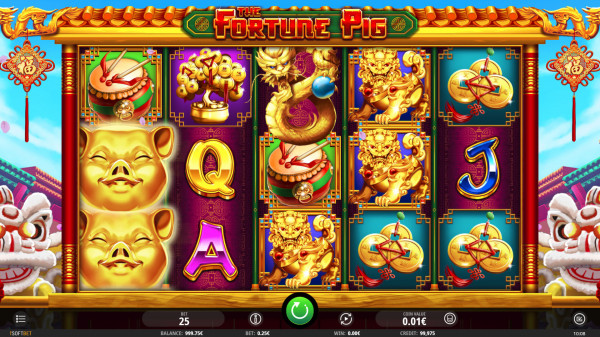 Top Casinos for The Fortune Pig

The first feature to highlight is the Wild symbol which is naturally represented by an image of a big golden pig statue. This symbol comes stacked on the reels and substitutes for all other symbols apart from the Scatter and Bonus symbols to help form winning combinations. It is the highest paying symbol in the game as if you land 5 Wilds on an active payline then you will win a fine payout worth 20X your wager.

The Scatter symbol is depicted by a beautifully crafted golden dragon and appears only on reels 1, 3, and 5 in the main game. Land 3 of these symbols on the same spin and you will trigger the special Free Spins feature where you will be awarded 8 Free Spins. During this feature, you can also benefit from In Sync reels as up to 5 reels can sync together on any Free Spin to further boost your chances of landing a big payday.

A Red Moneybag is the Bonus symbol in this slot and if you land 5 or more of these symbols anywhere in view then you will trigger the Cash Respins feature. Once activated, you will be given 3 Respins and each time a new Bonus symbol appears then the number of Respins will reset to 3. When there are no more Respins left, all the Bonus symbol amounts are added together and paid out. Keep a close eye on the Wild symbol during this feature as if it appears then it will gather all the current Bonus symbols on the reels to give you extra spaces to collect even more Bonus symbols so you have the chance to get lots more Respins.

More Bonuses for The Fortune Pig

The presentation of the game is superb as it takes place in front of a colourful parade with a clear blue sky overhead and two beautifully designed white dragons moving about on opposite sides of the reels. The reels themselves feature an ornate intricate design with dragons displaying banners that sway slowly as you spin the reels. Symbols consist of a Dragon, a Pig, a Money Tree, a Drum, a Lion, Golden Coins, along with classic A - J icons. The animations are very impressive to look at as symbols fly up and down the reels and breathe into life in spectacular fashion when part of a winning payline. In particular, the Free Spins is a special highlight as reels are covered by a golden glow to illustrate that they are in sync with one another.

The music is lively with a distinctly Asian-style soundtrack. It ties in perfectly with the Chinese theme of the game.


Our Verdict on The Fortune Pig

This slot comes from top software provider iSofBet and is the perfect way to celebrate the Chinese New Year. The Fortune Pig features outstanding graphics, a wonderful matching soundtrack, along with a nice set of exciting bonus features. The Free Spins bonus feature is the star attraction here as you have the chance to get 5 reels in sync to really enhance your chances of landing a big cash payout. The only downside to this feature is that unfortunately, you cannot retrigger additional Free Spins. The top prize for this slot is an excellent 801X your stake which can be won in the highly lucrative Cash Respins feature but be warned that this feature can take quite a few spins to trigger. In terms of variance, I found this slot to be Medium so you won’t have to wait too long to celebrate the Chinese New Year with a bang with a nice cash payout from this game! For slots with a similar Chinese theme, check out Pearl of the Orient and Great 88.

Win a lucky golden fortune on the reels when you play The Fortune Pig!