The Wish Master from NetEnt: Slot Review - a superb game, let the Master grant your wish of a jackpot

The Wish Master by NetEnt is one of the most progressive slot games on the market. Its many bonus features, including wilds, free spins and multipliers, add to the overall positive impression of the game.
casino game review netent slot machine slots the wish master

It may not come as a big surprise, given the slot game’s name, The Wish Master, but this game is reminiscent of Disney’s Aladdin. It stars equally well-designed characters as those we have come to expect to see from the animation giant, but that’s not all. The slot game is set in a desert, within a hidden cave, where players are well advised to look out for the genie, which is particularly profitable. 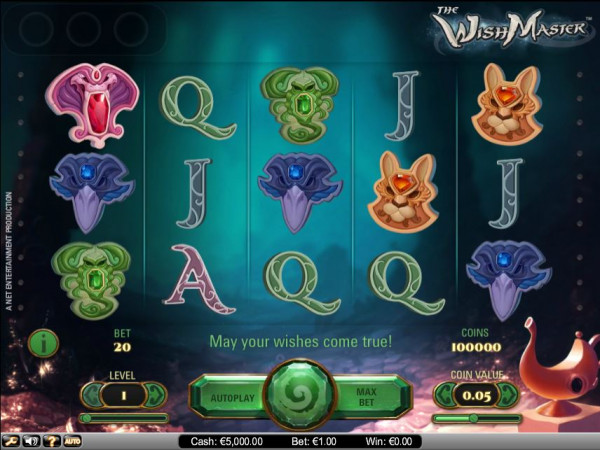 Top Casinos for The Wish Master

Now, on to those exciting features. There are wilds, random wilds, expanding wilds, multipliers and a wild reel. Among this array of features, it is difficult to have a pick of a favourite feature. NetEnt knew that this would be the case, and just to tease its players threw in the lamp symbol. If a player receives this symbol anywhere on the reel, the Wish Master is triggered. True to his name, the Master asks players to pick a random bonus feature (from extra wilds, expanding wilds, multipliers and random wilds). Oh, dear, that decision sounds daunting. Personally, I love multipliers. However, if I had to give sound advice, the expanding wilds often turns out to be super profitable.

Now, this feature, while clearly a great bonus to your gameplay, can also be your least favourite feature in The Wish Master. The decision is rather tough!

More Bonuses for The Wish Master

The slot game is so designed, that it can be enjoyed for hours on end. The colour scheme, while dark, is far from depressing, and is pleasant to look at. This, alongside exciting features, keeps players from tiring out. The game has been developed by NetEnt, and as we have come to expect the software giant, loads fast, without ever lagging and offers innovative features that heighten the gaming fun.

The slot game has 5 reels and 20 paylines, with stakes starting at 0.20 a spin and going up to 100.00. The latter, I imagine, is a little much for all types of players, even the risk-averse. What’s more, it may not even be all too suitable for a slot game, like The Wish Master, which tends to provide smaller wins frequently. Having said that, at times, if bonus features are hit in the right sequence, the winnings can be rather large. I would recommend a median stake per spin. This ensures that you can prolong your gameplay, and cash in on some great wins – even if you don’t hit big.

Our Verdict on The Wish Master

The Wish Master is a superb game. NetEnt’s idea of the lamp symbol, which allows players to pick their favourite bonus feature, is great. It adds that little bit of interactivity to the slot game and guarantees never a dull moment. The graphics are so good, that at times I felt I was watching an animation movie and not playing a slot game. This screams quality to me!