Turn It Up from Push Gaming: Slot Review - spin like a rock star!

Rock away in a packed out concert where a heavy metal band is blasting out tunes on stage.
casino game review push gaming slots turn it up

Love heavy metal music and headbanging your way through the crowd? Then this new release from popular games provider Push Gaming should be right up your alley as it invites players to a sold out concert where a heavy metal band is about to take to the stage. So get ready to give your eardrums a good going over and join in the cheering crowd as the band belt out thud-thumping songs one after the other to really make the ground shake beneath your feet! Let’s take a closer look at this online slot and see if it's worth turning up or turning down?

Turn It Up is a 5 reel slot with 10 paylines that includes Increasing Multipliers, Wild Symbols, Symbol Removals, and Free Spins. 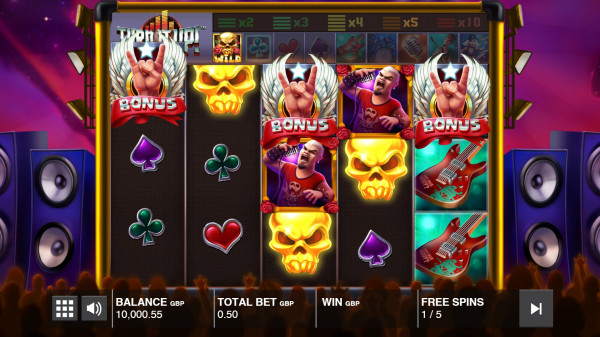 Top Casinos for Turn It Up

More Top Casinos for Turn It Up

The first thing you will notice when you play this slot is there is a bunch of mini-symbols placed just above the reels. These are called Reel Enhancers. When these symbols light up, then you will trigger one or more of the following features:

Players should note that all Reel Enhancers are reset after you land a win on the reels. Turn It Up also has a Win Spin Bonus feature which triggers randomly when you form a winning combination and once it is triggered, it will award several Reel Enhancers to further boost your chances of landing a massive cash prize.

The Wild symbol in this game is illustrated by a golden skull. Like most Wild symbols, the main job of this symbol is to substitute for all other symbols except the Scatter to help form winning combos on the reels. It only appears in game as a Reel Enhancer feature.

The Free Spins bonus game is triggered when you land 3 Scatter symbols anywhere on reels 1, 3, and 5. The Scatter symbol is represented by the universal hand signal for rock’n roll with a pair of wings in the background. Once activated, you will receive 5 Free Spins and for each losing Free Spin, you will be awarded one Reel Enhancer to help you land bigger wins. When the Free Spins end, you will receive the One More Win! Bonus where the reels will spin again and Reel Enhancers are collected until a win is formed on the reels.

Best Welcome Bonus for Turn It Up

More Bonuses for Turn It Up

This game features stunning 3D graphics as it’s set on the stage of a heavy metal rock concert with speakers and stage lights surrounding the reels and a bopping crowd at the bottom of the screen. Symbols are nicely polished and consist of the various members of the rock band as well as Drums, Guitars, Microphones, and Heart/Spade/Diamond/Club icons. The animations are excellent as symbols move rapidly up and down the reels and pop brightly when part of a winning payline. In particular, I liked how the reels deliberately slow down and the stage lights flash whenever you are close to triggering the Free Spins bonus game.

The music is rock-based as you would imagine with lots of hard-hitting guitar sounds. It captures the heavy metal theme of the game superbly.


Our Verdict on Turn It Up

This game is produced by Push Gaming and is one rock concert we highly enjoyed attending! Turn It Up features outstanding 3D visuals backed by an awesome heavy metal soundtrack and has just the right amount of bonus features to keep players entertained for a long time to come. The Reel Enhancers ensure things stay exciting as you spin the reels as every non-winning spin brings you that bit closer to a big cash prize. The Free Spins bonus game took quite some time to trigger but is definitely worth the wait considering you can land a potential 10X multiplier here. The only downside to this slot is that it might not appeal to players who are not fans of this genre of music. Variance-wise, I found this slot to be Medium so you can expect to land a steady flow of wins on the reels the more you play it. For slots with a similar heavy metal theme, check out Motörhead and Kiss.

Crank it to 11 and mosh your way to a massive cash payout when you play Turn It Up!