Twin Spin Deluxe is the latest release from software giant NetEnt. If this slot looks familiar to you then you’ll notice right away that it is an update of sorts to the hugely popular NetEnt slot Twin Spin. This classic game is one of the most widely played throughout the world so Twin Spin Deluxe has some pretty big shoes to fill! We reviewed Twin Spin in the past and found it to be a very exciting game to play with plenty to offer players. Can this game reach the dizzying heights of its predecessor or is it just a clone not worth spinning at all?

Twin Spin Deluxe is a 5 reel slot with a Cluster Pay system and comes with a Twin Reel bonus feature. 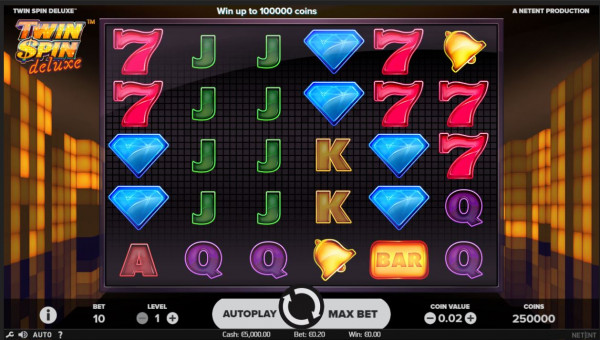 The first thing I noticed while playing this game is that it features a cluster pay structure rather than 243 ways to win like the original Twin Spin game. What this essentially means is that the game does not have any fixed paylines and winning combinations are created when 9 or more symbols appear in a cluster. These clusters can form horizontally as well as vertically once they are adjacent to each other on the reels. It is a whole new way of playing slots and a welcome one as there is huge potential to earn some massive payouts when you form some big clusters.

As you play the game, keep a close eye on the Diamond symbol as this symbol is the highest paying symbol in the game. Manage to land 30 of these symbols together on the reels and you’ll be rolling in the money with a maximum payout of 10,000 coins!

The standout attraction of this game is the Twin Reels feature. At the beginning of every spin, there is a chance for adjacent reels to link together and become Twin Reels. During a spin, the Twin Reels can expand to become 3, 4, 5, or even 6 linked adjacent reels. The number of reels that are linked together is completely random and occurs independently for each spin. This highly rewarding feature occurs quite frequently and can also be found in the original Twin Spin slot.

As you might expect from software developer NetEnt, the game features a superbly polished presentation that is full of bright neon lights and a disco-style background that changes colour as you play the game. Symbols are nicely detailed with bright neon colours and consist of Diamonds, Bells, Cherries, Bars, Sevens, and the usual A – J icons. The animations are a real visual treat as symbols run along the reels smoothly and pop brightly whenever you form a cluster.

The music features a trance-style techno soundtrack. It is quite relaxing and ties in nicely with the futuristic theme of the game.

The game features a Cluster Pay structure, an excellent RTP of 96.61%, and a maximum payout worth 1,000X your wager.


Our Verdict on Twin Spin Deluxe

NetEnt produced this highly impressive slot and it is more than a worthy update to the original Twin Spin game. The game is beautiful to look at and even better to play. The Cluster Pay design is a welcome addition and makes things really easy for players to just start spinning those reels right away. A minor gripe would be that the game does not contain that many features apart from the Twin Reel one but like I said it is only a minor issue. I found this game to be of Medium variance and the payouts are decent enough but when the Twin Reel feature kicks in then the rewards can be massive!

Fill the screen with sparkling diamonds to land a fortune in Twin Spin Deluxe!