Prepare to set sail for a battle of epic proportions in this new release from games provider Push Gaming. This game is all about a bunch of various Viking factions who are at war as they fight with each other not on land but on the sea of all places! Not only having to contend with swinging axes and hammers, the Vikings must keep a close eye on the water as waves build momentum in the background and hordes of seagulls fly over so they need to keep their wits about them and more importantly their eyes open at all times! Let’s climb aboard one of the Viking longships and see what fortune awaits us in this battle to end all battles! 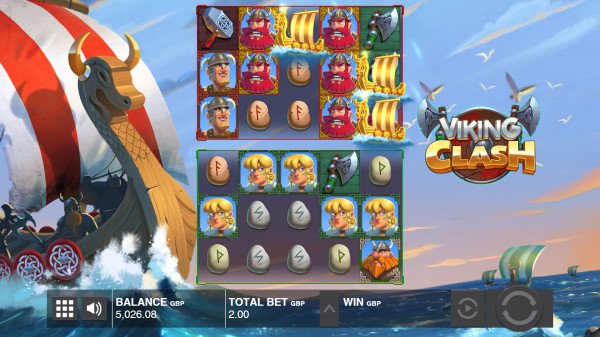 The first thing you will notice when you load up this game is that it features 2 reels which are red and green with each one containing 25 paylines. These reels also spin independently of each except when it comes to Scatter Symbols which is explained further down.

The Wild symbol in this game is illustrated by a golden Viking longship and like most Wilds, it substitutes for all other symbols apart from the Scatter symbol. This symbol only appears on the reels when the Wild Ship Feature randomly triggers in the base game. When it is activated, a wave will rush past leaving behind several Wild symbols on the reels to further increase your chances of creating a big win.

The graphics are amazing as Vikings are illustrated in delightful cartoonish form and the game plays out at sea with Viking longships everywhere and lots of seagulls flying high above. Symbols are superbly rendered onscreen and consist of an assortment of different looking Vikings along with Axes, Hammers, Shields, and a bunch of Runestones. The animations are slick as symbols fall smoothly into place on both sets of reels and shine brightly when part of a winning payline. In particular, I really like how the reels heat up with a cool flame-like effect whenever you are close to landing that all-important third Scatter symbol to trigger the excellent Viking Battle feature.

The music is atmospheric with lots of loud drum sounds used. It matches the fast-paced gameplay really well.


Our Verdict on Viking Clash

This slot comes from stellar software studio Push Gaming and is a rip-roaring gaming experience from start to finish! The presentation of the game is outstanding with superb 3D cartoon graphics on display and a thumping soundtrack to go along with it. There are plenty of bonus features to keep the action flowing nicely and I was able to trigger the Wild Ship feature quite a few times to collect a few decent wins on the reels. The Viking Battle game, on the other hand, took a bit of time to trigger but is entirely worth the wait since you can enjoy Sticky Wilds and Multipliers which can lead to massive cash payouts. Variance-wise, I found this game to be High so expect to endure quite a few dry spins before you eventually land a nice cash prize for your troubles. For slots with a similar Viking theme, make sure to check out Vikings go to Hell and Viking Runecraft.

Sail your longship to a huge fortune on the high seas when you play Viking Clash!