Vikings from NetEnt: Slot Review - plunder the reels for a huge fortune!

Team up with Ragnar, Lagertha, and co as they continue their endless quest for conquest in this awesome online slot!
casino game review netent slots vikings

It’s time to take out your sun compass and set sail for some good old-fashioned raiding in this latest release from software giants NetEnt! Vikings is based on the smash-hit TV show which transports you back in time to the 13th century when Vikings ruled the land, where people had to use their wits to survive, and answered only to the Norse Gods. The action-packed TV show closely follows the exploits of the legendary Viking ruler and warrior Ragnar Lothbrok who successfully raided England and became a Scandinavian king. Let’s join the Vikings on their latest raid to see what fortune awaits us on the reels? 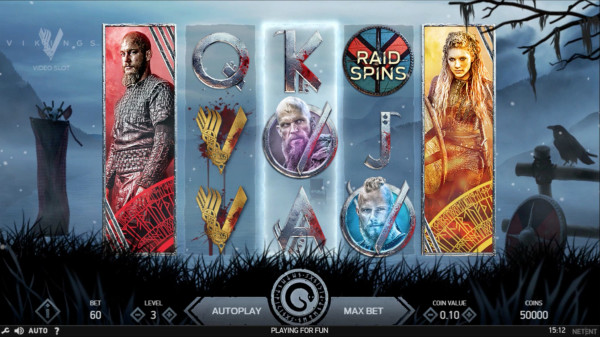 The first feature to highlight is that all of the main character symbols (Ragnar, Lagertha, Bjorn, and Floki) can appear stacked on the reels as high as 3 symbols. Land a few of these stacked symbols on a spin and you will take home a nice cash payout.

When you land a fully stacked Viking symbol in the white glowing frame on reel 3 then all other Viking symbols will transform into that symbol. This is known as the Hotspot feature. So if you land Ragnar on the Hotspot then all other character symbols will transform into Ragnar to give you a big win on the reels. Furthermore, this feature also activates Scatter Pays which means you will get a payout for just 3 symbols but if you get 27 symbols then you will walk away with a massive payout worth 243X your stake!

Vikings comes with a Shield Wall feature which is a random bonus event. When it triggers then it will appear as a cluster of 3x2 or 5x2 mystery symbols in a random section on the reels. These symbols will then transform into a randomly chosen symbol to give you a big cash prize!

The Bonus symbol is represented by a blue and red shield. Land 3 of these symbols simultaneously on reels 3, 4, and 5 to activate the Raid Spins feature. You will then be awarded 7 Raid Spins with a new reel set that features 7 reels and an incredible 78,125 ways to win! There are also 3 Hotspots now in play in Raid Spins which are active on reels 3, 4, and 5. Land a fully stacked Viking symbol in 1 or more of the Hotspots and all other Viking symbols outside and inside the Hotspots will transform into the same Viking symbol used to trigger the Hotspot feature. This can lead to lots more of the same Viking symbols appearing on the reels and is where you can win the game’s top prize worth a whopping 10,000X your total bet!

With this being a NetEnt game, you just know the graphics are going to be extra special and this slot certainly delivers on the front! Vikings takes place in front of a cold dark lake that’s surrounded by ravens, mist, tall mountains, and falling snow. You can almost smell a Viking raid about to happen! Symbols are superbly designed and consist of popular Viking characters such as Ragnar, Floki, Bjorn, Lagertha, as well as a Shield, the Vikings Logo, and your standard A – 10 icons. The animations are excellent as symbols burst into life when part of a winning payline. It is worth mentioning that you will be greeted by a nicely produced video highlighting the Vikings when you load up the game for the first time. It’s a really neat visual touch and definitely not worth skipping! I also like whenever you land a big win the reels how the symbols are covered in flames and a raven appears and flies straight towards you to cover the entire screen!

The music is of the epic variety and features a dark atmospheric soundtrack. It complements the action-packed gameplay perfectly.


Our Verdict on Vikings

This game is made by NetEnt and I am happy to report that it is a superb adaptation of the fantastic TV show. Vikings features amazing gameplay, top-notch graphics, a powerful soundtrack, and the perfect amount of bonus features to keep you raiding for hours on end! The Shield Wall and Hotspots features triggered quite frequently when playing and offer amazing payouts as high as 243X your stake! The standout feature of this slot is the Raid Spins feature which can take a bit of time to trigger but your patience is nicely rewarded with lucrative Hotspots on 3 reels as well as the opportunity to win 10,000X your total bet for each Raid Spin! When it comes to variance, I found this slot to be High, so be warned that it might take quite a bit of bankroll before you will see a profitable return on the reels. For slots with a similar Viking theme, check out Vikings go to Hell and Viking Runecraft.

Wreak havoc across the reels to win a Valhalla-sized fortune when you play Vikings!