It's time to join the Vikings in battle once more as this time around they take on Lucifer and a whole horde of demons in Hell!
casino game review slots vikings go berzerk vikings go to hell vikings go wild yggdrasil gaming

This action-packed game is a sequel to the blockbuster Yggdrasil Gaming slot Vikings go Berzerk. This time around the Vikings are taking part in their biggest battle yet, as they pit their wits against the flaming demon hordes of Hell! So get ready to sharpen your sword and have a shield at the ready as we join these enraged Nordic warriors on their latest adventure down south as they come face to face with the head honcho Lucifer himself and his massive demon army! 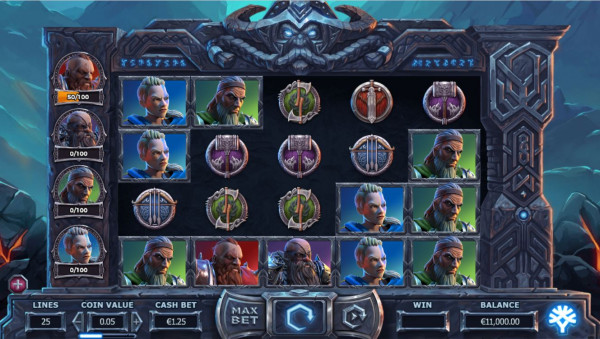 The first feature to highlight is the obligatory Wild symbol and this symbol is represented by a golden square with the word ‘Wild’ inscribed inside of it. Like typical Wild symbols, its main function is to substitute for all other symbols apart from the Free Spins symbol to help form winning combos on the reels.

The Free Spins symbol is denoted by an image of a ferocious looking demon. If you land 2 or more of these symbols on the reels then you will trigger the Demon Fights feature where a Viking will fight a demon. If the Viking wins the fight then he will transform into a Wild and 1 rage point will be added to its rage meter. Getting 2 Free Spins symbols on the reels also triggers the Respins feature where you are awarded a free Respin and all Wilds on the reels become sticky.

The Treasure Chest feature is activated when you land the Treasure Chest symbol on the 5th reel. This symbol is illustrated by a demonic-looking treasure chest that only appears on reel 5. Once triggered, you will be awarded either an Epic or Good tablet. The Epic Tablet awards up to 60 rage points for all Vikings, 600 – 1,200 coins, and up to 16 Free Spins whereas the Good Tablet awards 7 Free Spins, 60 rage points for 1 Viking, and a cash prize ranging between 150 - 300 coins.

At the end of each Free Spin, the Lord of Chains will appear when at least 1 Viking symbol is on the reels. He will then proceed to duke it out with a Viking and if the Viking successfully hits the Lord of Chains then he will transform into a Sticky Wild and slash away 1 health bar from the Lord of Chains. If you hit the Lord of Chains 3 times then you will defeat him and earn yourself 2 extra Free Spins, 2 random Wilds, and all Vikings will win their fights with the regular demon.

The Berserk Free Spins feature is triggered when you collect 100 rage points for one of the Vikings. In this Free Spins game, you will be awarded 7 Free Spins and the Viking that triggered the feature is then in Berzerk Mode. Vikings in Berzerk Mode always win against the demon. After each Berzerk Free Spin, 1 Viking will fight Lucifer with each successful hit awarding you 2 random Sticky Wilds and the Viking will also turn into a Sticky Wild. If you manage to defeat Lucifer with 3 successful hits then you will be awarded a nice 3X multiplier! It is also worth noting that all Vikings will defeat the demons in this feature. During this Free Spins game, make sure to keep a look out for the Treasure Chest symbol on reel 5 as it will award you an Epic or Good tablet. The Epic tablet will give you 3 extra Free Spins or 1 fully Wild Reel whereas the Good tablet will give you 2 extra Free Spins or 2 random Wilds.

The graphics are highly polished, slick, and the game features one of the best intro videos you will ever see in an online slot! The game takes place deep down inside Hell with beautifully designed Viking runes covering the reels with lots of jagged rocks in the background. Symbols are intricately detailed and consist of the 4 Vikings and the weapons they use in battle such as Swords, Axes, Bows, and Hammers. The animations are fantastic as winning symbols are surrounded by a sizzling hot flame effect when part of a winning combo and the fight sequences between the Vikings and demons are superbly executed on screen.

The music is suspenseful and ramps up in tempo as the reels furiously spin together. It ties in perfectly with the fast-paced nature of the game.


Our Verdict on Vikings go to Hell

This action-packed slot is made by Yggdrasil Gaming and to be honest is the best entry in the hugely popular Vikings series so far. It is graphically superior to its predecessors and boasts a huge range of bonus features to keep players coming back for more and more. The Berzerk Free Spins feature is highly rewarding as you can land a bunch of Sticky Wilds in addition to Viking Sticky Wilds and if you manage to defeat Lucifer then you will bag yourself a nice 3X multiplier payout. I found this game to be of Medium variance so it might take you some time before you land a big win on the reels but with a top prize of 3,500X to aim for then there is no better time to join these Vikings in battle right now! For slots with a similar Viking theme, check out Vikings Storm and Viking Runecraft.

Defeat Lucifer and his demon army to walk away with a huge cash prize when you play Vikings go to Hell!