Venture deep inside a rainforest to seek out the king of the jungle when you play this entertaining slot from iSoftBet!
casino game review isoftbet slots wild ape

It’s time to head off on an exciting and wild jungle adventure in this new slot from premier software developer iSoftBet! A fearsome ape is the king of the jungle here and it is said if you manage to find him on the reels then he will gladly give you a huge cash prize. Joining the ape in the jungle, are a snappy crocodile, some cute lemurs, as well as tropical birds. It’s one colourful rainforest just bursting with life! So put on a safari hat and join us as we enter the jungle to locate the elusive ape and hopefully land a few cash prizes along the way. 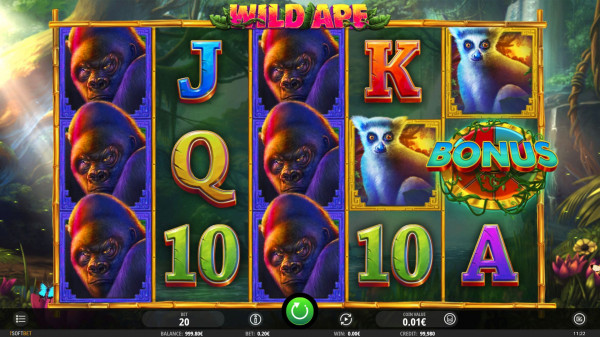 The first feature to highlight is the most valuable symbol in the game as it is important to know which symbols to keep an eye out for as you spin the reels. As you might imagine, the most lucrative symbol here is the Ape. This symbol comes stacked on the reels and if you manage to hit 5 Ape symbols then you'll be leaving the jungle with a massive cash prize worth 25X your initial wager! That’s not all as if you manage to completely fill 3 of the reels with this symbol then you will trigger the Wild Ape Respins feature. Here, you will be awarded 3 Respins and the Ape will proceed to smash the reels in order to extend them from 20 paylines to 40 paylines while also turning all Ape symbols into Wilds.

The Wild symbol in the game is illustrated by an image of the Ape’s eyes. Like most Wilds, the main job of this symbol is to substitute for all other symbols bar the Scatter to help create winning combinations on the reels.

Speaking of the Scatter symbol, it is represented by a bunch of vines with the word ‘Bonus’ placed in front of them. This symbol is key to triggering the special Bonus Wheel feature. To do this, you will need to land the Bonus symbol on reels 1, 3, and 5 on the same spin. Once triggered, you will be taken to a new screen where you get to spin a Bonus Wheel to determine how many Free Spins and Extra Wilds you will be awarded. This is an extremely lucrative bonus feature as it is possible to claim up to 20 Free Spins as well as up to a staggering 50 Extra Wilds here! This feature also plays out on an extended reel set of 40 paylines to further enhance your chances of landing a big win on the reels.

The presentation of the game is visually stunning as it takes place in a living breathing jungle with a flowing waterfall in the background, bugs hovering over flowers, and sunrays breaking through on the lefthand side of the reels. Symbols are wonderfully designed and full of detail and vibrant colours. They consist of an Ape, a Crocodile, a Lemur, a Bird, along with classic A – 10 playing card icons. The animations are top-notch as symbols move rapidly and shine brightly when part of a win. A particular highlight is when you need one more Scatter symbol to trigger the Bonus Wheel feature on the reels. When this happens then the reels will proceed to move deliberately slowly to further ramp the tension to see if the last Scatter symbol will appear or not. It really adds to the gameplay.

The music is upbeat and full of animal noises and soft panpipe sound effects. It fits in really well with the Jungle theme of the slot.


Our Verdict on Wild Ape

This game is produced by top software studio iSoftBet and is a mildly enjoyable jungle adventure on the reels. It features stylish and colourful graphics, an atmospheric soundtrack, as well a small but nice selection of bonus features to enjoy. Keep a very close eye on the Ape symbol as you spin the reels in this game as it is key to triggering the Wild Ape Respin feature where you can benefit from 3 Respins with 3 reels filled with lots of lucrative Wild symbols. The standout feature of this game is the Bonus Wheel feature as it’s here where you can get your hands on up to 20 Free Spins plus a whopping 50 Extra Wilds if you are lucky. It’s particularly pleasing that both these bonus features also have an extended reel set of 40 paylines. The top prize for this slot is a decent 1,000X your wager which can be won by filling all of the reels with Ape symbols. Variance-wise, it is Medium so you’ll find that wins occur more frequently the more you play. For slots with a similar Jungle theme, check out Epic Ape and Jungle Spirit: Call of the Wild.

Win a jungle sized fortune when you find the Wild Ape on the reels!