This latest release from acclaimed software studio ELK Studios is a swashbuckling adventure set on some very stormy seas. The game focuses on a notorious pirate called Anne Bonny who is loved and admired by the people of Port Royale. She decides to steer her ship into the battle zone and take on the might of the East India Company. We find out that her father was betrayed by this nefarious company and she has vowed revenge on them as she plans to bring back wealth and treasures to the kind folk of Port Royale. Let’s set sail with Anne and her crew to see just how wild those seas can become.

Wild Seas is a 5 reel slot game with 178 ways to win that includes Sailing Wilds, Sticky Wilds, and 2 Bonus Games: Break the Convoy and Loot the Treasure. 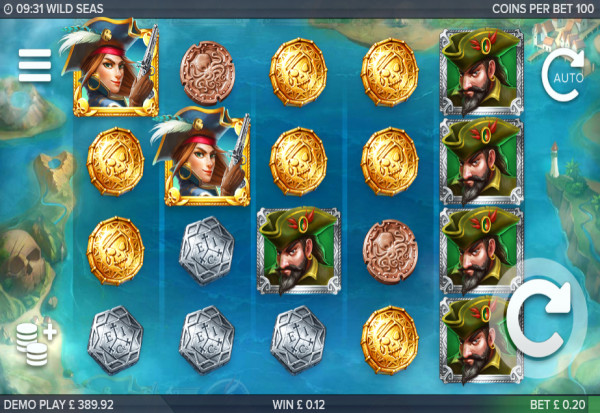 The first thing to highlight is that the game features a whopping 178 ways to win which should provide players with plenty of opportunities to land some huge wins on the reels. Amazingly, there are 3 Wild symbols in this game. The first Wild symbol is depicted by a black flag with the game title displayed inside of it. Like typical Wild symbols, it substitutes for all other symbols to help form winning combinations on the reels. This symbol is also used to trigger the bonus game Break the Convoy. The second Wild symbol is a bunch of ships with the word ‘Wild’ displayed on their sails. This is the Sailing Wilds symbol and it moves leftwards one reel for every Free Spin. When this symbol sinks after being hit 3 times, it transforms into the Sticky Wild symbol. This symbol is illustrated by a golden treasure chest with the word ‘Wild’ displayed in front of it and it substitutes for all other symbols except the Barrels symbols. This symbol turns sticky when it is hit and remains in place on the reels for the next spin.

Wild Seas features 2 cracking Free Spins bonus games: Break the Convoy and Loot the Treasure. To activate the Break the Convoy feature, you need to land 2 Wild symbols simultaneously on reels 2 and 4. Once triggered, a convoy of Sailing Wild ships will cover reel 5 and all of the ship’s captain symbols will transform so that only 1 of them appears on the reels. It is then up to the player to attempt to Break the Convoy! The Sailing Wilds ships on reel 5 will move 1 reel to the left with each Free Spin. Pirate ships can appear on reel 5 and start shooting the convoy ships on the same row. Every time you hit a ship, you’ll be awarded a Free Spin. If you manage to hit one ship 3 times in a row then it will sink to reveal a Sticky Wild treasure chest symbol.

Once the ships move off the reels and at least one ship has been sunk then the Loot the Treasure bonus game will commence. In this feature, you will receive Sticky Wild chests on all of the locations held by the captain’s loot chests. The aim is to get as many Sticky Wild chests as possible in order to collect all of the treasures. Reels 2, 3, and 4 will fill with treasure chests symbols which can be opened to reveal Sticky Wilds and more Sailing Wilds ships are added to reel 5. The Free Spins continue until you land on a bomb barrel on reel 1 which will explode in dramatic fashion to end the bonus game.

The presentation of the game is top-notch and features some amazing graphics as the game takes place on the tropical and colourful island of Port Royale where a battle of epic proportions is brewing. Symbols are wonderfully designed and consist of Anne Bonny, some snooty looking Captains as well as a collection of coins. The animations are visually stunning as symbols glisten and sparkle nicely when part of a winning combination. They really come into their own when you trigger the bonus games, as ships move along the reels and hit each other with cannonballs to really ramp up the tension as you play the game.

The music is action-packed with lots of big drums and heightened piano sounds. It complements the theme of the game superbly.


Our Verdict on Wild Seas

ELK Studios produced this rip-roaring adventure of a slot. This game is without a shadow of a doubt, one of the best pirate-themed slots that I’ve ever played. One thing that I enjoyed was that Elk Studios created a backstory to the game so you know exactly why Anne Bonny is taking on the mighty East India Company. Most slots have no backstory at all, so kudos to ELK Studios for creating one. Wild Seas is superbly designed, visually stunning, very easy to play, and contains 2 amazing bonus games which surprisingly trigger quite frequently when playing. The bonus games can be highly lucrative especially if you manage to land a few Sticky Wilds in the Loot the Treasure game. I found this game to be of medium variance so you won’t be waiting too long until you sail yourself to a nice payout on the reels. With a top jackpot prize worth 1,780X your wager to aim for, you better swab the decks and get your ship ready to set sail as soon as possible!

Steer your ship to a huge haul of treasure when you play Wild Seas!